I recently made it through Cormac McCarthy’s Blood Meridian: Or the Evening Redness in the West.

Wow! What a book! 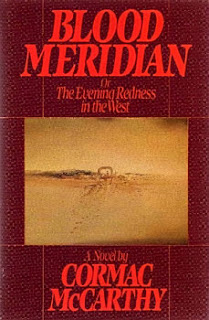 Prospective readers need to be warned, this is one of the most violent pieces of fiction that I have read. If you do not want to read page after page about killings and torture, then do not read this. I emphasize, this book is filled with graphic and brutal viciousness.


As someone who knows a fair amount about history I know that human cruelty of the magnitude depicted here is real, and it happens more often then I like to think about. I also know that many of these fictional horrors presented here are based upon real events, as is the general plot of this story.

One striking thing about the violence and killings that are presented in Blood Meridian is that McCarthy presents them without emotion, judgment or commentary. The fact that the savagery is so impersonal in this work, made it a little easier for me to get through. McCarthy seems to be depicting the violence like an objective scientist would do so. This ties in with what seems to be the main goal of this work, which is to study violence dispassionately but philosophically. McCarthy is not pro – violence. He just seems to be trying to dig very deep without letting moral judgments get too much in the way. I think that this is also is related to the fact that other then periods, there is no punctuation in the book. It as if McCarthy is trying to avoid letting things like commas and apostrophes shade the reality of what he is depicting.

McCarthy tells a very basic story of a gang of scalp hunters rampaging through the American West and Mexico in 1849. Though brutal to begin with, the gang encounters a strange, mystical character called The Judge. This demon-like persona seems to represent violence and war, both in reality and in philosophy. Blood Meridian is full of The Judge’s elaborate, and intricate soliloquies and meditations on the primal and universal nature of human violence. I cheated a bit and did some Google searching on this book. It seems that the Judge’s beliefs are deeply connected with obscure theological thinking dating back to medieval and even Biblical times.

This is a deep work. Almost every page is filled with heavy philosophical overtones both on violence as well as humankind’s place in the universe. In many ways it is reminiscent of Herman Melville’s Moby-Dick, with which this work has parallels as well as allusions to. Like Melville, McCarthy seems to be trying to get to a universal theory and to ascertain fundamental truths about people and the world. The central theme here is the ubiquity of human violence.

Yet, as much as I love deep philosophical and metaphysical ramblings such as presented in this work, I am a rationalist at heart. I believe that human violence, aggression and sadism can be simply explained by our genes. Our tendency to kill is ultimately a product of natural selection and evolution. I believe that violence is not all that special in this light, and shares a similar explanations with other important aspects to the human condition such as love, altruism, greed, etc. Due to my convictions, maybe some the mystery and profoundness that McCarthy builds around human viciousness are a bit lost upon me. Is he making too much of what is essentially a survival strategy shaped by millions of years of evolution?

It seems to me that if one were a victim of human savagery, one might really experience a terrible emotional and soul- damaging reality that might be “worthy” of deep metaphysical musings. However, McCarthy’s text is uninterested in the point of view of the victims.

As a result, at times while reading the book, I began to think perhaps McCarthy is reading (or writing) to much into the philosophy and Meta–physics of violence. Strangely, the text actually ends in an argument that may be similar my own thoughts. In the book’s thematic climax, the other main character, known as The Kid, ultimately dismisses the Judge and his philosophy, “You ain’t nothing” is his summation of it all.  Ironically the Judge replies, “You speak truer than you know” seemingly in agreement. Perhaps it is all just genes, chemistry, and electrical impulses! This book so transcends simple explanation! This IS an amazingly philosophic and complex work.

Blood Meridian is an extraordinary book for those who feel that they can get through it. There are so many amazing aspects that I have not touched on, not the least of which is an innovative and beautiful writing style. It is not however, for the faint of heart.
Posted by Brian Joseph at 10:21 PM

Prospective readers need to be warned, this is one of the most violent pieces of fiction that I have read. If you do not want to read page after page about killings and torture, then do not read this. I emphasize, this book is filled with graphic and brutal viciousness.

Really? (says she in a shocked voice).

Oh, no! I just bought it, and thought it'd be a different, possibly less cold than The Road. When it donged on me that it's titled BLOOD Meridian, and that won't be without a reason.

I'll see if I'm cut for it. I know he's more than just gratuitously violent. Lately I am desperate trying to cut my postmodern teeth with worthy authors who at the root keep some moral rules of play. We'll see.

Hi Silvia - Thanks for stopping by.

I have actually stayed away from The Road as I thought that it might be a bit too disturbing.

As for post modern books that deal with morality, I recently reread Samuel R. Delany's Triton. That book was extremely odd, but not disturbing.

Funny, I don't know which one outdoes the other one, Blood Meridian, or The Road. The Road wasn't disturbing. OK, hard to explain without spoilers. All through the book I was nervous. Is Cormack going to play a dishonest card with me, reader? But no, he was painful but tender and honest. Sort of what you say at the end of this post. If you can go through the book, there's more in it than that. I had to get used to it a bit (that's why I had to pick it up a second time, the first time I was very nervous and suspicious). And it's strange, a 'traditional' book such as Suskind's The Perfume -which I have put myself through twice, (oh, the things we do, the things we do), come to think about it, is much more disturbing than The Road. The Road is happening in a post apocalyptic world, while The Perfume happens in an uneventful and peaceful French town!
And thanks for the recommendation. I love the odd and not disturbing. I had not heard of Triton at all, because when it comes to postmodern I'm an absolute ignorant.