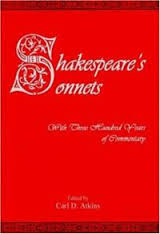 From time to time, I will continue my ruminations on a somewhat random Shakespeare sonnet. While I have no intention to move in numerical order or to cover every single sonnet, I found that, having intended on exploring Sonnet Number 11, I really wanted to take a look at the preceding Sonnets before doing so. The first 126 sonnets are a part of the “Fair Youth” sequence, in which the Bard is heaping copious praise as well as advice upon a young man. Critics have long debated whether these affections are platonic or not. The first eleven sonnets can be looked at as a subgroup, known as the Procreation Sonnets, and all closely relate to one another. Thus for now, I will jump back and ponder Sonnet Number 1.

From fairest creatures we desire increase,

But as the riper should by time decease,

But thou, contracted to thine own bright eyes,
Feed'st thy light's flame with self-substantial fuel,

Making a famine where abundance lies,

Thyself thy foe, to thy sweet self too cruel.

Thou that art now the world's fresh ornament
And only herald to the gaudy spring,

Within thine own bud buriest thy content
And, tender churl, makest waste in niggarding.
Pity the world, or else this glutton be,

To eat the world's due, by the grave and thee.

Obviously this is an exhortation to the worthy object to go forth and be fruitful and multiply. Furthermore, Shakespeare is ascribing the young man’s reluctance to do so as character weakness. The hesitation is compared to gluttony, one of the seven deadly sins. The religious connections, as well as the aesthetic beauty of the poem, raise this argument above the proverbial obnoxious friends and relatives who attempt to bully childless people into having families.

Still, this is a somewhat unfamiliar Shakespeare to me. To be sure, the art form of sonnets is very different from that of plays. However, I am accustomed to a Shakespeare who shows human nature and not one who tells us what he is thinking. I also find that the worldview that Shakespeare presents, at least in the plays, is more often than not cynical and at times even nihilistic. I include the comedies in this assessment. Yet, here is a voice advising someone what is right, as well as how to live and even what is beneficial to the world at large. “Pity the world” if you pass on without having children.

There are several possibilities. It could be that there is irony or parody here. A search through commentary on this group of sonnets does reveal a school of thought that this set of works is indeed a caricature of other poets and their works. I personally am having trouble detecting satire here, however. Or perhaps the “voice” of the poem may not really be Shakespeare but a character or point of view that he is simply projecting.

Of course, we sometimes forget that great artists produce their works over a number of years and may shift into different moods and outlooks from time to time. Perhaps in this eloquent but unusual expression of love, the great poet is exhibiting an antidote to the darkness of the world by a prescription for the beautiful to procreate.

You're brave to tackle the meaning of this sonnet. Very interesting post!

Hi Suko - Sometimes I do think of reading as tackling heroic quests. Of course it is a little safer :)

Loved your interpretation. Brings fresh meaning to the sonnet for me!

Hi Harvee - Thanks! One could argue that I raised more questions here then I interpreted, however!

I really like that you're analysing the first sonnet! It says so much about love, life, and what we aim for. I've also found it to be so different to the Shakespeare I'm used to... it seems to expose something much more intimate about his character.

I definitely agree with your point on the immortality of Shakespeare's poetry - I hope his work will be retained throughout the future, regardless of technological advances.

I look forward to your future posts on the Sonnets!

I agree that we can put down words that become permanent when the mood was, in fact, only fleeting. Very nicely put about Shakespeare creating beauty in his attempt to persuade another to "procreate" beauty. Thanks for the insightful review.

Hi Lucy - I have no doubt that as long as civilization does not collapse, Shakespeare will be valued.


OPf course the love and life thing here is very opinionated, I know that there is some debate about whether or not the object of these Sonnets was a real person or just a hypothetical one. If it was a real person I wonder what their reaction to this was.

Hi Sharon - I think that folks, myself included often fall into idea that we must pin down an author's thinking throughout their body of work. But as we all know people are very changeable.


Thanks for the good word!

Do you like/read poetry much or is it a thing for Shakespeare? Favourite poets?

Hi Guy - Like everything else literary when it comes to poetry i do not read enough. My readings have been very limited. i would say that my favorite poet is Whitman, but I have not read some of the greats. I have also read Frost, and a few others fairly extensively. Right now I am reading some poetry from Emerson.

There is really something about Shakespeare however!

A shame my various English Lit teachers didn't have such a passion for their subject and made Shakespeare sound about as interesting as dirty dishwater. If I'd read this post as a schoolgirl I may well not have developed such a dread of all matters Bard.

I keep a volume of Tennyson next to my bed

Hi Petty - Thanks! I must admit that my literature teachers and professors were pretty good. I was i who was a bit of a boor at that age.

Hi Guy - I only read a little Tennyson in school. Though I think that you may be on to something about keep a book of poetry near one's bed and digesting it in small morsels.

I am not familiar enough with Shakespeare's poems to say anything about. Like Guy I used to have Tennyson next to my bed, I really love his poems.
Is the first the first one he wrote, are they in chronological order?
Maybe he was still trying to find his own voice.

Though I am not one hundred percent certain about the entire order of composition, the first eleven of the sonnets seem to go in order.