Decision in Philadelphia: The Constitutional Convention of 1787 by James Lincoln Collier and Christopher Collier 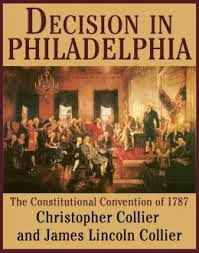 In 1787, a group of the American elites got together in Philadelphia and fashioned what became the American Constitution. The impact that this document has had upon history cannot be overstated. The details relating to the creation of the blueprint of American government are both historically important and intellectually intriguing.

Decision in Philadelphia: The Constitutional Convention of 1787 by the brothers James Lincoln Collier and Christopher Collier has become, since its publication in 1986, something of a classic history book concerning the momentous but contentious event. This work effectively and coherently weaves together an enormously complex story. Multiple issues were debated and resolved by a bevy of great political minds, both famous and not so famous, including George Washington, Benjamin Franklin, James Madison, Luther Martin, Charles Pinckney, James Wilson and many others.

The issues and disagreements that drove the Convention were rooted in the great controversies of the time. They included proportional representation versus the rights of each state to be equally represented, state versus federal power, the balance of power between the executive, legislature and the judiciary, national security versus personal liberty and an entire additional subset of issues relating to slavery. It is striking how many of these points are still being debated by Americans in the twenty-first century.

Different groups sometimes had strong positions staked out on these various controversies, but were not always reflective of individual states. On the varying cultures and attitudes exhibited by the citizens of each state, the authors write,

“Their country had been formed piecemeal. The colonies had been created at different times under different philosophies of life, ranging from the hard bitten Calvinism of New England to the worldly hedonism of the Deep South.”

Adding to the complexity was the fact that various issues and the discussions upon them overlapped and intertwined. The Colliers observe,

“The making of the constitution was a kaleidoscopic process in which shifts in one place often produced changes in seemingly unrelated places.”

This is not just a legalistic and political history, as the personalities of the various participants are explored and analyzed in some depth. Some new angles on various famous people, such as Washington and Hamilton, are studied. Lesser-known personages, such as Charles Pinckney and James Wilson, both of whom played vital roles at the Convention, are cast into the light. How the particular traits of the individuals involved affected the final product is also explored.

As I often do I would like to discuss just one of many themes highlighted in this book. One thing that impressed me about this work was that while the authors acknowledge the remarkable accomplishment that the fashioning of this document was, they are not hesitant to criticize aspects of the final outcome. These days, many people, understandably, express an awe concerning the American Constitution.  Here the authors manage to exhibit some of this awe while at the same time displaying an analytical and critical hard headedness. This document, for all its virtues, was like anything as complex - a flawed document.

As is generally known, the Constitution implied the legality of slavery. Under the Constitution, the importation of slaves was permitted for twenty years, slavery was allowed to expand into the American West and slave owners were allowed to pursue escaped slaves into the North.  Historical commentators from every quarter often castigate these terrible facts. The Colliers dig a little deeper than most, however. While explaining that the Convention would surely have failed if the numerous opponents of this evil had insisted on total abolition, a plausible case is laid out explaining how the antislavery forces could have prevented the above provisions from being incorporated into the final document. Basically, the states that fought hardest for these pro-slavery provisions, North Carolina, South Carolina and Georgia, threatened to not join the Union and become independent nations if the institution of slavery was not protected. The authors contend that this should have been considered an empty threat by the antislavery delegates, as at the time, these pro-slavery states were weak, under populated and beset by both internal and external threats. Thus, these states could never have gone it alone without the remainder of the country. Furthermore, the Colliers argue that had the pro-slavery provisions not been included, the institution of slavery would have been so weakened that it may have died out on its own and the American Civil War avoided.

The authors do not shy away from highlighting other flaws. For instance, to this day the American presidential election system is much more complicated than it seems or it needs to be. On numerous occasions, the candidate with less popular votes has become President. The authors comment,

“the American Electoral Collage system of choosing a president is a Rube -Goldberg machine. It was jerry rigged of odds and ends of parliamentary junk, pressed together by contending interests. And the question that inevitably comes up is whether it ought to be abandoned.”

Finally, the authors take a look at America and its history. They starkly examine not only American successes, but also what they see as its flaws, including race relations, over-reliance on military solutions, etc., and they attribute a great many of both to the Constitution. Their ultimate conclusion is that despite its shortcomings, the American Constitution has been, in the past and up to the present, a triumph in both pragmatic accomplishment as well as democracy.

Of course, this book covers an event of unprecedented importance. It does so in an understandable and extremely satisfying way. The writing is also very good. There are so many important points covered in this work. As often is the case, I have barely scratched the surface in relation to these topics. This is highly recommended for anyone with an interest the history of government, this period or American history in general.
Posted by Brian Joseph at 7:04 AM

Excellent comments. I'm curious who the publisher is. I'm off to Amazon to check it out. Sometimes it's hard to picture how our decisions will affect us over time. I wish those at the Constitutional Convention could have had the foresight to understand the ramifications of some of their decisions regarding slavery.

Hi Heidi - Thanks for the good word.

Though I did not get it out of this book, I understand that Alexander hamilton, who was likely slavery's biggest opponent among the Founding Fathers, was utterly disgusted that the Constitution did little to curtail slavery. On this issue, he seemed to have the foresight that others lacked.

As always such interesting reading. It sounds like this is a must read for all those with an interest in the politics that shaped America.

Hi Tracy - I think that this one is the a must read for those with related interests as it is the most popular, a vert worthy, popular history of the Convention.

Fascinating study for those interested in the history of America!

Hi Harvee - Indeed this is a must read for those interested in the subject.

This does sound interesting Brian. Especially the take about the pro-slavery provisions in the Constitution.

Hope you are enjoying the holidays and Happy, Healthy New Year to you!

Hi Naida - The hypocrisy of the pro - slavery provisions in a document that was supposed to enshrine freedom was not lost on some of the delegates.


have a very happy New Year!

Based on your excellent review this sounds like a great book to read on the making of the Constitution.
I would recommend to you a similar book on this topic that I enjoyed reading two years ago, Plain, Honest Men:The Making of the American Constitution by Richard Beeman.

Hi James - I looked up the Beeman book and it looks very good. Thanks for the recommendation. This was such an interesting and important era that it bears reading histories from multiple points of view.

How interesting. They write children's books and I've read one of their books earlier this year. I guess that makes them aprticularly apt to write in an engaging way.

Hi Caroline - I had heard about thier childrens books. I will go back and check out your commentary on the book that you read. I belive that both thier childrens and adult works tend to be respected.

Happy New Year, Brian. I am so glad I was introduced to your blog this year. All the best for a terrific 2014!

Hi Lee Ann - I am also very happy that I found your superb site.

Have a happy New Year!

This is a very good book. I need to read it to acquire a better grip on our constitution came to be and how it works now. Thanks for a great review, as usual.

Hi Sharon - Without a doubt that book is key in our understanding of the event. Even if one disagreed with the authors's opinions and style, it has had an impact on how folks see the convention and the Constitution.

I'm "a little" late commenting on this....(blushes), but I did want to post my thoughts on your review.

As always, your analysis and observations are highly interesting! Although you point out that you've barely scratched the surface, I think you've given your readers a pretty good idea of how this book deals with such a highly complex, historically important subject.

It's ironic, as well as interesting and tragic, to think that, had the Constitution not favored the institution of slavery as much as it did, the Civil War might never have taken place. How very sad! All those lives need not have been lost.....

This is not usually the type of thing I read, but I think I should start incorporating books like this one into 'my reading repertoire'. After all, the Constitution of the United States is an exemplary document, despite its flaws. Several foreign governments have even patterned their own constitutions on it. Besides, as an American, I should become better informed about the workings of this great country of ours!

Thanks for featuring this book! I'm adding it to my Goodreads TBE shelves, as well as my Amazon wish list!!

Hi Maria - I actually think that it is neat to go back and look and discuss oder posts.