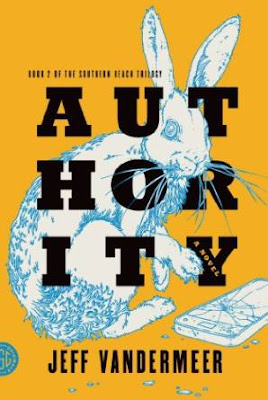 The novel Authority by Jeff VanderMeer is the second book of the Southern Reach Trilogy. My commentary on the first of the series, Annihilation, is here.

Though in many ways less compelling than the first novel in the series, this is a very creative book that takes all sorts of chances as it goes into unexpected directions. Where Annihilation was an atmospheric mix of science fiction and psychological horror, this book takes off in a completely different direction, as it is essentially a quirky science fiction based character study with healthy doses of humor in terms of tone and style.

Area X is a large swath of land that is mysteriously isolated by an invisible barrier, where bizarre, terrifying and deadly events take place. This story takes place almost entirely outside of this area and concerns itself with the government organization, called Southern Reach, tasked with investigating the strange phenomena. The main character is the new director of Southern Reach, a man nicknamed “Control.” As Control digs into the very bizarre phenomena of Area X, he discovers that the psychological effects that plague visitors to the area are beginning to affect Southern Reach personnel. As the story develops, the borders of Area X begin to expand and envelope Southern Reach headquarters.

Taking place shortly after the events of the first book, much of the narrative concerns itself with the interactions between Control and a duplicate of The Biologist, the main character from the first book. Somehow, a copy of the Biologist has been produced and has returned from Area X. The copied women is now known as "Ghost Bird”.

Control finds that he is very drawn to Ghost Bird’s fascinating character and background. VanderMeer is a very different writer who breaks rules. His uniqueness as an author is illustrated as he portrays this attraction in a nonromantic and nonsexual way. Thus avoiding an obvious cliché and forgoing a path that most others writers would have taken.

Another testament to VanderMeer’s quality as a writer is that, for one chapter and in a few other segments, the narrative veers in to the atmospheric psychological, science fiction and horror mix that characterized the previous book. He then elegantly transitions back out of this style.

Control is one of the more interesting and well-crafted characters that I have encountered in literature. On the surface, he is a new high-powered leader of a super serious and secret organization. His background is in dealing with terrorists and other national security threats, but when his inner self is revealed, he is shown to be a man wracked with insecurities and self-doubt. He also has a wry and ironic sense of humor. His relationship with his mother, also a government operative, as well as that with his deceased father, is examined in detail over the course of the narrative.

His portrayal is unique; at one point during a highly stressful meeting, Control imagines that he would like to be relaxing at home with his cat,

"A vision of his couch in his new home, of Chorry curled up on his lap, of music playing, of a book in hand. A better place than here."

Annihilation left a long series of unanswered questions and strange mysteries as to the nature of Area X and the operation of Southern Reach. Slowly, through the course of the narrative, some, but not all, of these blanks are filled in.

The themes of the first novel, climate change, the tendency for people to construct faulty thought paradigms and the inscrutability of reality are present here and are further developed. On the issues of faulty belief systems that people cling to and of their resulting harm, Control ponders one aspect of this that manifests itself in our modern world,

"Because more and more in the modern Internet era you came across isolated instances of a mind virus or worm: brains that self-washed, bathed in received ideologies that came down from on high, ideologies that could remain dormant or hidden for years, silent as death until they struck."

This book goes off in a completely different from the first in in the series terms of style, and it is still be successful as a testament to VanderMeer’s creativity and skill as a writer.  Though a science fiction character study with strains of satire leaves us with a book that is a little less of a page-turner than the atmospheric psychological horror of the first novel, this book is a worthy piece of writing in its own right.

This novel does not work as standalone work, as it presupposes that the reader is familiar with the events of Annihilation.  As an artistic and unique example of speculative fiction that is part of a larger whole, it is a very worthwhile sequel. I will be moving ahead to read the third and final book in the trilogy, Acceptance, right away.

Brian Joseph, it sounds as if you're really enjoying this trilogy of speculative fiction. The ideas in this book that you touch upon in this post sound fascinating. Excellent review of book two!

This sounds like a book with interesting characters and challenging ideas. A great combination for any science fiction novel.

A friend has spoken very highly of this trilogy and your review confirms its merits. VanderMeer sounds like an excellent writer - it's quite a feat to pull off something as complex and inventive as this series.

Thanks Suko - I have actually finished the third book. It has really been an enjoyable series.

Hi James - Indeed, science fiction is at its best when it contains substance.

Hi Jacqui - Having read the books in sequence, I found them easy to follow. However, as the series progresses, all sorts of times in the history of Area X are explored. This must have been complicated to put together.

Whilst it doesn't sound as if you got quite so much out of this book it certainly sounds like you had a good time reading it. I look forward to reading your thoughts on the final book.

Looks like book two is a wonderful transition. I can't help but sympathize with Control. I too would have found the idea of relaxing at home with a cat and a book simply wonderful.
Looking forward to the next review.

I must confess that I am not a great fan of speculative fiction but you wrote a very good and interesting review. It would be interesting if you expounded more on "faulty beliefs" etc..

Thanks Sharon. The faulty beliefs that VandeMeer explores manifests themselves in various ways in the books. In addition to the internet reference that I quoted above, several characters are hypnotized and operate on implanted ideas. Over and over again characters mention that Area X is unknowable because our basic assumptions about reality may be faulty. People are shown t have hidden pasts and connections that cause others to make false assumptions about them.

I think that this series might be enjoyed by folks who do not typically read this genre.

Hi Tracy - I did not find this book was not as good as the first, but it was still very good.

Hi Delia - Indeed, on long work days those are my thoughts too!

You are making me really want to read these books!

It's interesting to learn that the author switched styles effortlessly, Brian.

Now, I cannot wait to read your commentary on the last book.

Hi Stephanie - I would love to know what you thought if you gave these a try.

Hi Deepika - The ability to write in different ways really impresses me about VanderMeer.

I find it actually quite fascinating that this one is so different. Would you say that the first works as a standalone? This one clearly doesn't. I suppose you're reading part three as well. Can't wait to hear how they work together.

It's always good when you can pick up the next book in a series or a trilogy right away. All too often I have to wait for the author to write it!

Kendall and Kylie Pack K-Gems said...
This comment has been removed by a blog administrator.
March 2, 2016 at 8:14 PM

Hi Caroline - The first book can work as a standalone. It ends with many open questions. However, the enigmas fit with the theme that the Universe contains things that are unknowable.

I will be posting commentary on Book three shortly.

Hi Guy - Reading new books that are likely to have sequels does lead to the problem of having to wait. I am usually a few years behind on on even my "new" reading so it is often not a problem.

Glad you are enjoying this trilogy so much. It does sound interesting. I like the idea of quirky science fiction. I also like the cover art on these books.

GREAT review, Brian! As usual, you patiently and thoroughly analyze many aspects of the book you're reviewing, thus giving your readers a global view of the work in question (although, at other times, you zero in on a single aspect of a work; either approach is interesting.)

As an SF aficionado, I should be going for this book, but, as you know from my comment on your review of "Annihilation", I don't think I could handle this novel, either. That's because of the element of horror.

Otherwise, this novel does sound like a very compelling, fascinating read. The writing style, from the quotes you included in your review, is definitely quirky, but I like quirky. I just don't like horror.

These novels have suddenly reminded me of the work of Harlan Ellison, an ST writer from the 60s. He's definitely a great writer, but his work does have some relationship with the horror genre. I remember reading a short story of his, titled "I Have No Mouth, and I Must Scream"..... It was in a book of short stories penned by him. The book's title is "Dangerous Visions". Indeed!! I don't think I read all the stories in it. Lol.

I'm glad you're enjoying The Southern Reach trilogy, and have given us your thoughts on the first two. I sure hope you enjoy the third one!! :)

As I believe we discussed there are books that disturb me and a few that I stay away from. Though there is little graphic violence or gore in these books there are mentions of disturbing things and a lot of scary and ominous passages. Thus I understand you wanting to stay away.

I have read Harlan Ellison and he has written some really disturbing science fiction. His short story "I Have No Mouth, and I Must Scream" has stayed with me for decades.

Hi Naida - VandeeMeer's quirkiness is different. I am often drawn to originality.