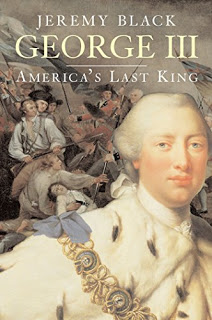 Hi Brian, great review. Out of curiosity I searched and there is a bio by
Janice Hadlow about the private lives of George III and Queen Charlotte which has gotten very good reviews. George III sounds like a decent King and it's to his credit because he had all this power and could have abused it. Parliament kept him in check. The American Revolutionary era such a fascinating period. So many players.

Hey Kathy - I never looked into the Hadlow book. I think that the term “private lives” put me off. It really should not as this book shows, titles are often about marketing.

George did my abuse power. That is fairly rare in history.

Sounds like an interesting, if somewhat challenging, book. I am fond of Alan Bennett's play, "The Madness of George III", and the film which was adapted from it.

Hi James - I saw the movie. I loved it. The story only covered a very small segment of George’s life though.

Was not one of the George III's nicknames "Farmer George" because he liked to putter around on his farms getting his hands dirty with agricultural things? That's pretty down to earth for any monarch.

Hi Debra - Yes it was his nickname because he liked to play around with farming stuff. He was less ostentatious then a lot of royalty.

I confess I know very little about George III, mostly having to do with his relationship to the American rebellion. This biography sounds quite sympathetic toward him and seems to have done a good job of explicating his character. Your review, as always, is excellent.

Thanks Dorothy- Those of us who delve into The American Revolution know George best via that way. Though this book was somewhat sympathetic it does look at his negative aspects.

I'm only familiar with George III in connection with the American Revolution (also a favorite time period of mine). This book intrigues me because it does tell about the rest of his life. But after reading your review I think I should probably start with a different, more easily accessible biography about him before attempting this one.

Interesting that you had another biography with which to compare this one. In my reading of American Presidential biographies, I have only chosen one per president due to how long they usually are, but I have wondered about the slant the biographer brings to the book.

Great review. It reminds me of a movie about his life made back in the nineties. It focused a great deal on his illness and his stubborn views about monarchy. I have not read a biography of King George but I want to. However since I don't know much about him, per your suggestion, I may look for something more basic to start with.

In a Fourth of July post I did on my own blog a few years ago, I humorously referred to George III as "the Man" in order to give the Founding Fathers some street cred, but I knew full well the actual history was a bit more complicated than that, as it always is. I'd be interested in reading this book.

i just finished a bio of Jonathon Swift. altho he lived before G.111, the prejudices against Catholics and Presbyterians both were already pretty severe. He was appointed Dean of St. Patrick's cathedral in Dublin, but he had to pay his first year's wages to the authorities as a sort of initiation present... apparently this was pretty common... his hopes of achieving a bishopric in the Anglican church were squashed because he was Irish and in some way associated with the Catholics and Presbyterians in that country...

Hi Sharon- I really liked The Madness of King George. But it only focused on a short segment of his life.

I may try one more biography of George. I will blog about it if I do.

Hi Lark - I think many of us who are interested in The Revolution only know of George from one angle. This is one reason that big books are great.

Hi Judy - it is so interesting how biographies vary. When possible I try to read more then one. But if course, time to read them is always an issue.

Hi Kirk - I guess that George was the man! LOL. Seriously. from the point of view of the colonists, it makes sense.

Hi Muddpuddle - The situation with religious minorities throughout the world was often bad. That is interesting about Swift. I need to learn more about the entire issue.

George III sounds far more complex than I had perceived him to be. Great review of the book. Have a blessed and beautiful week.

Thanks Belle. He was indeed complex.

I had to sort of laugh that you mention the book is comprised of 452 dense pages ... that's usually not too good of a sign. As for the other biographer Christopher Hibbert: I have liked his book on the French Revolution ... more of a popular historian ... which is fine by me. You might soon be the candidate to write the new biography of George III ..... just saying

Hi Sue - Lol. I will probably read at least one more biography of George. I liked Hibbert’s book but I felt that it was incomplete, even for a popular biography.

Glad you enjoyed this one Brian. I know nothing about George III but I hope you find the perfect book on him one day. Interesting that he had no affairs, I've read about a few other historical figures who were the same, they loved their wives and didn't keep mistresses.
Great post as always.

Hi Naida - I think that George was unusual because he was average in a sea of outrageousness.

I plan to give one more George biography a try. Hopefully the third time will be the charm.


thank you for another incredibly done post dear Brain

as i know little about George third so it was quite an opportunity for me learn more and for this thanks again !

as because writer is professor of history it seems he is really inspired by George ,i hardly learnt such qualities in peoples who were in power ,specially easing nervous visitors sounds amazing ,i think this quality points out how strong person he was inwardly

i learnt lot form this review about era and the personality and thoroughly enjoyed knowing it through your insightful views
blessings to your world !

Thanks Baili - The calming of visitors is actually very impressive.

As for slavery, at that time, some people were beginning to see that it was evil. The majority of people did not yet hold those values.

Brother Brian, Reads Like A Different Kind Of Bio And Stoked You Were Able To Expand Your Knowledge - Hope You Find What You Are Looking For - Congrats On The Gym Work - Be Well And Enjoy Your Weekend

Hey Padre - Expanding knowledge is such a satisfying thing to do.

Hi Brian, I agree with cuecard above - write a bio of him yourself. :)

Hi Carol - You are all making me laugh 😆

Somewhere on my shelves is a book about his daughters - he had quite a few kids, as I recall. The things you say about him as a person all seem to appear in the film The Madness Of King George, which does indeed suggest porphyria. The servants are under orders to check his urine daily, not knowing why. (Finally, one of them says he has had enough and he is going off to open a nice grocery shop. Fictional, of course, but amusing, as his name is Fortnum)

Hi Sue - Yes, I saw the film. It was very good. It was almost like someone knew that urine testing would one day be important.

The story of his daughters must be interesting.

A basic history of that time period with a focus on George's actions would be the book for me to read. The aspects of history with its dates, events has to be chronological for me to enjoy.

Have you seen "Hamilton"? King George has a solo, You'll be back, telling the colonies that they love him and they'll come back to him.

Hi Susan - He did reign for a long time.

I am still searching for a more conventional biography.

That scene In Hamilton reflected the attitude of many of the British at the time.

I have been away from blogging for a few weeks, but am back again. This biography sounds intriguing to me, because of your intelligent commentary. It sounds as if George was a solid person and leader.

Thanks Suko and welcome back. Solid person is a good way to put it.

The lack of a chronological focus wouldn't faze me so much in a history book although I guess it is a little odd for a biography. Does Black explain why he approached things thematically rather than chronologically at all?

Hi Richard. Black does not go into the reason for the book’s structure. I just got the impression that it reflects the way he thinks.

As an American, I grew up believing George III was a bad king. He had his challenges, but he didn't lose his head and England didn't abandon the monarchy during those turbulent times. I would also like to read a good bio of GIII.

Hi Jane - The Patriot side did indeed see George as a villain and those sentiments led led down through today to some extent. He did indeed make lots of mistakes in regards to America. But he did have his virtues.