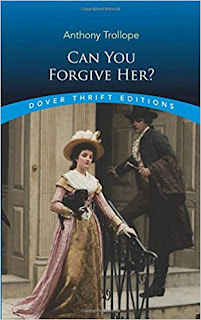 I have now read all six books of Anthony Trollope’s Palliser Series. I thought that the books ranged from very good to outstanding and that all were worth reading. My favorite of the series was Can You Forgive Her?

Though not the focus of all the novels, the Palliser Books are more or less centered upon Plantagenet Palliser. There is so much to be said about his character. As I have written in my other posts on these books, the Duke is outwardly stiff and seemingly cold, yet he displays inner depth, warm emotions and integrity that show up at unexpected moments. His relationship with his wife, Lady Glencora, is complex and fascinating to read about. Early in the series, at a low point in their relationship, Glencora observed,

“We were told to marry each other and did it. When could he have learned to love me? … he requires no loving, either to take it or to give it. I wish it were so with me."

Readers should not be fooled by the above quotation. Much of the remainder of the series involves the Duke showing that the above is not true. He did come to love his wife and yearn for reciprocal affection, all the while remaining outwardly stoic and very controlled, almost ridiculously so.

There are some themes that run through most of The Palliser books. There is a lot of political philosophy in these novels. Politics is often corrupt, and politicians are often self-serving. However, a minority of honest and dedicated public servants keeps a nation strong and on an ethical course. These honest public servants spring up among both conservatives and liberals, but tend to be moderates. Phineas Finn is a good example of this noble public servant. He is a liberal who nonetheless rejects the more radical legislation. He is also honest and is willing to buck his party for what he thinks is right. 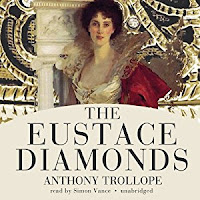 Themes of marriage and romantic relationships are displayed throughout the series. The conflict between wealth, class and true love is everywhere. Sometimes, motivated by class and money issues, relatives successfully destroy relationships between mismatched couples, but sometimes the couples hold out. In typical Trollopean complexity, sometimes the relatives are right and one half of the couple is of questionable character. This was likely the case with Lady Glencora’s first engagement with Burgo Fitzgerald, as well as when relatives unsuccessfully tried to stop the marriage between Emily Wharton and Ferdinand Lopez. Other times, the relatives are wrong, as was the case with several couples in The Duke’s Children.

The Chronicles of Barsetshire was written before The Palliser Series and seems less cynical and world weary. There are villains and people who act immorally in the earlier series, but they seem less vicious and inhumane. For instance, Ferdinand Lopez, a classic narcissistic abuser, is highlighted in book five of Palliser, The Prime Minister. There is nothing funny about him. In contrast, the maleficent characters in The Chronicles of Barsetshire, such as Mrs. Proudie, are often portrayed comically and are given some humanity. Links to my commentary on all of the books of both series can be found below.

In a perfect world, I would recommend reading all of the books of both series in order. However, Can You Forgive Her?, Phineas Finn and The Eustace Diamonds can be read as standalones. 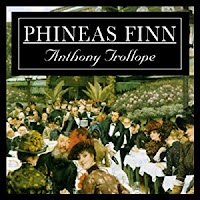 In the end, I liked this series a little less than The Chronicles of Barsetshire. The earlier series, for the reasons mentioned above, seemed to be little warmer. Some of the politics in The Palliser Series also became a little tedious, especially in the books that focused on Phineas Finn. However, I am quibbling. The Palliser Books are filled with Trollope’s keen insights on people and relationships. They exude subtlety and nuance. They are often funny and always entertaining. The political philosophy here is also worth pondering. This is a fine series of books that I am glad to have read.

My commentary on Can You Forgive Her? is here.

My commentary on Phineas Finn is here.

My commentary on The Eustace Diamonds is here.

My commentary on The Eustace Diamonds and Anti- Semitism is here.

My commentary on Phineas Redux is here.

My commentary on The Prime Minister is here

My commentary on The Duke’s Children is here.

My commentary on The Warden is here.

My commentary on Barchester Towers is here.

My commentary on Doctor Thorne is here.

My commentary Framley Parsonage here and as it relates to gender roles here.

My commentary on The Small House at Allington is here.

My commentary on the Last Chronicle of Barset is here.

My commentary on the relationship of Lily Dale and Johnny Eames in The Chronicles of Barsetshire series is here.

My general commentary on The Chronicles of Barsetshire is here.

My commentary on Trollope’s unusual Point of View is here.

The Duke's Children by Anthony Trollope 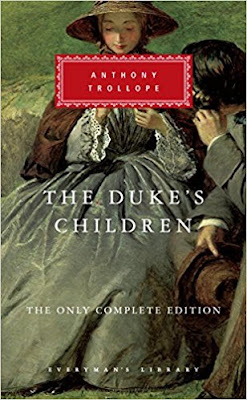 The Duke’s Children by Anthony Trollope is the sixth and the last of The Palliser books. When this novel was originally published, more than 200 pages were removed from the original version, probably at the demand of the publisher. In 2015, scholars released the restored, unabridged version. This unabridged version is the one that I read.

The story centers on Plantagenet Palliser, who is the Duke of Omnium, and his three children. His sons are Lord Silverbridge and Lord Gerald, and his daughter is Lady Mary.

The story opens shortly after the death of Lady Glencora, the Duke’s wife and mother of the children. The Duke’s sons and his daughter are acting in ways that displease the straitlaced Duke. Both of his sons get thrown out of college for misbehavior, and both incur large gambling debts. Both Silverbridge and Mary enter into engagements with people that the Duke disapproves of. Silverbridge wants to marry Isabel Boncassen. This is problematic as she is an American. Mary becomes engaged to a man named Frank Tregear. He is a commoner whose family is no longer wealthy. This leads the Duke to forbid the marriage.

Some of the old characters from previous books in the series are back, particularly Phineas Finn and his wife, formally Madame Max Goesler. However, I think that the end of the series would have been more satisfying had more characters returned.

Like most Trollope novels, there is a lot going on between the covers of this work. The restored version that I read is just short of 800 dense pages in length. I could devote entire posts to various characters and relationships.

I want to write few words about the Duke’s attempt to break up the relationship between Mary and Tregear. There are all sorts of ghosts and emotional time bombs tied to this aspect of the narrative. The fact that this book is part of a fairly long series of novels adds to the effect of the past coming back. It is revealed in the text that prior to her death, Last Glencora supported the relationship between the two young people, even though it was clear that the Duke would not approve. There are parallels to Lady Glencora’s own past here. In Can You Forgive Her? it was revealed that Lady Glencora’s first engagement with Burgo Fitzgerald was broken up by relatives who found Burgo’s social status and character unacceptable. The marriage between Lady Glencora and the Duke was subsequently arranged. It turned out that Palliser quickly fell in love with Lady Glencora, and she came to return much of his affection and respect. However, the scars remained.

It is revealed that Lady Glencora wanted to avoid the same outcome for her daughter. The Duke is simultaneously haunted by the past, though he believes that things were done for the best. He knows that his wife loved Burgo first. There is one important difference between the situations; Burgo was shown of very questionable character, and Tregear is decent and responsible. Again and again, it is said as well as implied that if Mary were forced to give up Tregear, she would spend all of her future days depressed and despondent. These two romances and ensuing conflicts bookend the entire Palliser Series neatly. They pack an emotional weight and show how Trollope is capable of presenting life’s complexities. Relatives interfering with romances can prevent catastrophe as they did with Lady Glencora. However, such interference can also be overbearing and oppressive and has the potential to ruin lives as we see with Mary.

The Duke is not unaware of the contradictions. At one point he contemplates the situation,

"The mutual assent which leads to marriage should no doubt be spontaneous. Who does not feel that? Young love should speak from its first doubtful unconscious spark,— a spark which any breath of air may quench or cherish,— till it becomes a flame which nothing can satisfy but the union of the two lovers. No one should be told to love, or bidden to marry, this man or that woman. The theory of this is plain to us all, and till we have sons or daughters whom we feel imperatively obliged to control, the theory is unassailable. But the duty is so imperative! The Duke had taught himself to believe that as his wife would have been thrown away on the world had she been allowed to marry Burgo Fitzgerald, so would his daughter be thrown away were she allowed to marry Mr. Tregear. Therefore the theory of spontaneous love must in this case be set aside. Therefore the spark,— would that it had been no more!— must be quenched. Therefore there could be no union of two lovers”

There is more going on in this book. The resistance to Isabel and Silverbridge’s marriage is also very interesting as Trollope uses it as a vehicle to analyze the British aristocracy. Another character, Lady Mabel Grex, is a woman who rejects the man that she loves for a chance of marrying into wealth. Her ties to the book’s other characters and themes are fascinating.

This is a very good book. With that I think that the end of this fine series could have been a little stronger had more of the characters from previous books been introduced and their stories wrapped up in neater ways. The last book in Trollope’s The Barchester Chronicles, The Last Chronicle of Barset, did that in a much more effective way.

Despite a few shortcomings, this is a worthy wrap up to the series. Since the events in this novel are related to past entries, I would only recommend reading the earlier books first. Like most of the author’s books, this novel is full of Trollope’s insights into human nature and his exploration of characters. In fact, this is a must read for anyone who has made it this far into the series. So ends the Palliser Series.