Self-Portrait in Black and White by Thomas Chatterton Williams 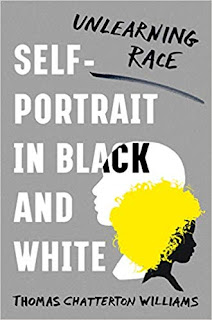 Published this year, Self-Portrait in Black and White by Thomas Chatterton Williams is a book that is getting a lot of attention with people who are interested in race and the social issues that surround the topic. I recently read Williams’s first book, Losing My Cool. My commentary on that work is here. Like Losing My Cool, this book is a memoir. This one picks off where the earlier work ended. In addition to being a memoir, this work lays out Williams’s thoughts and philosophy on race and related social issues. I found this to be a rational and thoughtful book. I read a fair number of opinion pieces and have read a few books on related topics. I think that Williams goes in a direction here that is not typical of a lot of other thinkers. I also think that this very important book.


Losing My Cool was published over nine years ago. Since then, Williams has earned his PHD, moved to France and has married a French woman. The couple has had two children. It is significant in relation to the ideas presented here that Williams emphasizes his exposure to people of mixed race, ethnicity and cultures. The author is mixed race himself, his father is African American and his mother is a white American. His wife is French and is white. As per Williams, his children appear to be white. Many of his current friends and associates, including some ex - girlfriends represent an international group of people whose identities tend to be mixed. Williams weaves his experiences with this racial and ethnic diversity into his philosophy.

I am not renouncing my blackness and going on about my day; I am rejecting the legitimacy of the entire racial construct in which blackness functions as one orienting pole.

Along the way, Williams address racism in America and throughout the world. He delves into the issue both historically and currently. He is also critical of the wave of identity politics that has been dominating the discourse lately. He sees this school of thought as perpetuating the problem. The author is critical of both the right and the left here. William digs deeply into philosophy. He talks a lot about group identity and culture. Culture is obviously a very relevant issue to all this. The author is in no way calling for the abolition of culture. He writes,

The intellectual and cultural discoveries that sustained us are ours forever. But the “dreadful deceit” that would call these things racial is just that, a lie that can never be made noble.

Williams ultimately calls for individuals to renounce race like he has done.

It is my hope that as many people as possible, of all skin tones and hair textures , will come to turn away from the racial delusion .

There is a lot more here. For instance, Williams talks about the need for people of different races to try to understand the perspectives of people who are from different backgrounds and points to how much of the current discourse coming from both sides on race is all part of the same problem. He writes,

Working toward opposing conclusions, racists and many anti-racists alike eagerly reduce people to abstract color categories, all the while feeding off of and legitimizing each other, while any of us searching for gray areas and common ground get devoured twice. Both sides mystify racial identity, interpreting it as something fixed and determinative, and almost supernatural in scope. This way of thinking about human difference is seductive for many reasons but it has failed us.

Due to the fact that Williams is exposed to so many mixed - race people, one can see how this helped him formulate the philosophy that race is an illusion.

My take is that Williams is on the correct track. Both in America and elsewhere humanity must move beyond race. This is obviously the way to move beyond racism as well as the extreme identity politics comping out of the left.  However, I am not sure that this will be accomplished by the founding of a philosophical movement or by people actually renouncing their race. Instead, I think this moving beyond race is already happening and will continue to happen more naturally.

I also agree with most of Williams's social criticism.  There is still racism and it must be condemned and opposed. There is also a school of thought, that labels itself as anti - racist, that is now engaging in all sorts of illiberal race essentialism and stereotyping of people. I have called this trend postmodernism in some of my previous posts.

This is very important and thought-provoking book. All too many philosophies on race and racism these days fit too neatly in conservative, or far - left identity - based rhetoric. Williams illustrates a path here that rejects dogma coming from both directions. His arguments are rational and ethical. Williams goes into a lot of detail and down some interesting paths that I cannot cover in their entirety here. Though I do not agree with all of Williams points, I think that he is on to some very important truths here. Even if one does not agree with Williams, he is a bold a lively thinker who is worth reading.
Posted by Brian Joseph at 2:18 PM 32 comments:

The Turn of the Screw by Henry James 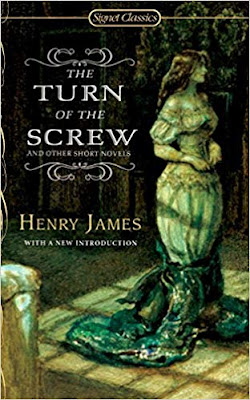 The Turn of the Screw is Henry James’s famous gothic tale. Though a well - known book this is the first time that I have read it.  I found this novella to be an odd but superbly crafted story. The only other book that I have read by James is The Portrait of a Lady. Though there were some similarities, especially with regards to James’s prose style, this book was very different in terms of plot and character development.  Though unusual in some ways, I found that this was a creative tale that was well worth the read.

The story is framed as a manuscript. An unknown narrator is reading a first - person account of the experiences of a young governess who is now deceased.  The narrator’s friend had purported to know the governess. The governess is a young woman who is hired by a man who has become responsible for his young niece and nephew after the death of their parents. The man wants nothing to do with the children and sends the governess out to a country estate to take charge of them.

The girl is named Flora and the boy is named Miles.  Mrs. Grose is the housekeeper who befriends the governess. Shortly after her arrival the governess begins to see apparitions. With the help of Mrs. Grose, she surmises that the ghosts are Mr. Quint, the uncle’s former valet and Miss Jessel, the children’s former governess. Before their deaths, the pair were carrying on an affair. The children can see them too and the governess is convinced that the spirits are trying to draw the children into a web of evil. As the story goes on the pair of spirits continue to show themselves and it becomes apparent that they are indeed drawing the children into something. Both the governess and Mrs. Grose become more and more desperate to protect the siblings.

Like The Portrait of a Lady, James’s prose is complex here. His sentences are intricately constructed and contain a lot of dashes.  As this is a first - person narrative the dashes are used to create the effect of a stream of consciousness. With that, James can write some very effective prose. In what I think is one of the best passages in the book, the governess describes an early encounter with the apparition Quint.

There came to me thus a bewilderment of vision of which, after these years, there is no living view that I can hope to give. An unknown man in a lonely place is a permitted object of fear to a young woman privately bred; and the figure that faced me was— a few more seconds assured me— as little anyone else I knew as it was the image that had been in my mind. I had not seen it in Harley Street— I had not seen it anywhere. The place, moreover, in the strangest way in the world, had, on the instant, and by the very fact of its appearance, become a solitude. To me at least, making my statement here with a deliberation with which I have never made it, the whole feeling of the moment returns. It was as if, while I took in— what I did take in— all the rest of the scene had been stricken with death. I can hear again, as I write, the intense hush in which the sounds of evening dropped. The rooks stopped cawing in the golden sky, and the friendly hour lost, for the minute, all its voice

The above is characteristic of the style of the story. It is both intricate and atmospheric.

I read a little bit of the online commentary on this book. Throughout the years there has been a lot of debate about it. Some have argued that the governess is delusional and thus the supernatural aspects of the plot are in her head. I disagree with this assessment. Though Mrs. Grose does not see the ghosts, she confirms that too many things that the governess observes about them as being accurate. There is no way that the governess could have known these things.

There are a lot of different theories floating around about this story. Regardless of the specific literary theories, this tale is obviously about repression. There is the sense that the relationship between the children and the ghosts is something that exists under the surface. When the governess and Mrs. Grose discuss it, they do so in whispers. There is something about all this that is unspeakable.

At one point Mrs. Grose describes Flora’s description of the ghosts

“From that child— horrors! There!” she sighed with tragic relief. “On my honor, miss, she says things—!” But at this evocation she broke down; she dropped, with a sudden sob, upon my sofa and, as I had seen her do before, gave way to all the grief of it.

It seems that James talking about sexual repression here. The above quotation as well as other things in the story seem to support this strongly.  Several critics have gone further and suggested that the relationship between the ghosts and the children has all the earmarks of sexual abuse. This seems plausible but I am not one hundred percent certain that this is what James meant to portray.

This is not a cookie cutter type ghost story. James’s distinctive writing style, unusual plot twists and underlying themes make this unique.  This is an odd story, but in many ways a brilliant one.  Though I have read a limited number of books by this author, I think that this might make a good introduction to his work. This is the second James book that I have read and I will likely read more.