The Ape that Understood the Universe by Steve Stewart-Williams 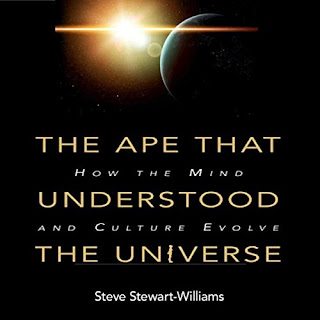 The Ape that Understood the Universe by Steve Stewart-Williams an exploration of evolutionary psychology. Stewart-Williams argues for and explains throughout the book how both human minds and culture evolved based upon the principles of natural selection. The author is an associate professor of psychology at Nottingham University Malaysia Campus. He is originally from New Zealand. He is active on Twitter where I find his Tweets thoughtful and enlightening. This was first published in 2018.

This book presents the argument that both human nature and human culture evolved over time. Genes tended to drive human nature and something called memes drive culture. Both genes and memes tend to spread and are more successful when they lead to behavior that promotes their own survival and propagation.

Early on, author talks about the various schools of thought that object to these ideas. There are some who object based upon the fact that they do not accept evolution. Others, often associated with the left, dislike these ideas because these ideas tend to contradict a blank slate approach to human behavior. That is, they attribute almost all aspects of human behavior to culture and do not believe that any behavioral tendencies are innate.

The book digs into things like evolution, genes and heredity fairly deeply. Various human and animal behaviors are examined. So many different behaviors and emotions are covered in this book that it is difficult to write a comprehensive summery of it all. I will try to concentrate on just a few key themes.

An important point here is that genes tend to reproduce and become more commonplace when they encourage the organism to behave in ways that propagate the gene. Thus, genes that lead an organism to be fitter and more likely to survive and reproduce are often successful. But sometimes this work differently. Sometimes genes drive organisms to behave in ways that encourage the spread of the particular gene, even if the behavior is detrimental to an organism’s survival. For instance, human parents often try to protect children, even this behavior risks their own life. Human genes are at the root of this behavior because half of a child’s genes come from one particular parent, so saving a child’s life probably will lead to the spread of these genes. As the book points out, tendencies like parents protecting children are not beneficial to the individual exhibiting them in terms of survival. However, they are beneficial to the gene that encourages such behavior.

The author concludes at one point,

Evolution is about the survival of the fittest genes. Genes are selected if they get themselves copied faster than rival alleles. Adaptations are designed to pass on the genes giving rise to them. And organisms are not survival machines, baby-making machines, grandchild-making machines, or even inclusive fitness machines. Organisms – from worms to groundhogs to humans – are gene machines: biomachines designed to propagate their hereditary material.

Many behaviors and characteristics that people and animals engage in are for the benefit of attracting partners. This has driven both physical characteristics as well as behavior. The peacock’s tail is one of the most flamboyant examples in the natural world. In people, this manifests itself in all sorts of complex ways that are explored in this book. Many of the things that attract people to those of the opposite sex  are the result of natural selection. For instance, both men and women look for traits in partners that indicate health.

Another trait that will benefit he propagation of genes is caring for children. The author points out that in comparison to most other species, human children need a lot of care, time and resources. Thus, humans are one of the species where males devote significant time and effort towards childcare. This is because, even if a male has lots of children, his genes will not be passed on if his children do not survive and thrive. In species where the care of young is less resource dependent then it is in humans, males are less likely to be involved in child care.

Attraction, caring for children and protecting family members are only some of behaviors that this book goes into. Many other attributes relating to sex, relationships, jealousy, aggression, cooperation, altruism, to name just a few, are explored.

The later part of the book examines the theory of memetics, that is, the contention that memes evolve based upon the rules of natural selection. What is a meme? Memes include ideas and creative works, but they are more than just those things. The author writes,

memes aren’t just ideas. They’re anything that can be passed on socially, including mannerisms, rituals, and practices.

The author argues that while not entirely identical to genes, memes also evolve in ways that promote themselves. Furthermore, as human culture became more sophisticated, genes and memes began to in influence and shape one another.

Stewart-Williams sometimes goes off in directions where he speculates a lot. When he does so he clearly indicates that he is doing so. This is one of the book’s many strong points.

Science writer Michael Shermer wrote the forward to this book. He points out something that Stewart-Williams does that is very intellectually honest and helps improve the level of inquiry and debate. That is, throughout the book the author steel - mans the augments of people who disagree with his premises. Steel - manning is the opposite of straw manning. Steel- manning means that the best augments of people that one disagrees with are presented in honest ways. This is done throughout the book. This is so well done that at times I was almost convinced of the counter argument presented.

One thing that surprised me about his book is that a lot of it is lively and humorous. The author creates entertaining thought experiments. For instance, throughout the book, the text goes back to a thought experiment where an imagined alien intelligence observing human behavior becomes very puzzled by that behavior. This is presented in a light but informative way. The book is also punctuated by humor. I found that this kept things fun and entertaining despite the importance of this subject.

I believe that this book provides is an accurate description of humanity and how we got to where we are. In our age many are challenging these premises. Stewart-Williams provides a reasoned and spirited defense in response to these criticisms. The book was also educational. It seems meticulously researched and as per above, it was very fair. I highly recommend this to those interested in psychology, humanity, evolution and science in general.