Some References on the Conversation About Islam

The below is not a comprehensive list or an exhaustive exploration of the issues involved. It is just a sampling of the some of the trends that I refer to in my post.

There is a group of public intellectuals often called Islamic Reformers. They include a mix of ex – Muslims as well as some folks who identify as Muslims. The group includes Maajid Nawaz, Asra Q. Nomani, Maajid Usman Nawaz among others. This group often campaign against Radical Islam as well as the oppression meted out by Islamist governments and societies. They advocate for the rights of Women, LGBT rights, religious minorities, atheists, etc., within Islamist societies. They tend to simultaneously advocate against violence and bigotry directed at Muslims. Almost all of them come under scathing criticism as well as harassment and threats from Islamists as well as anti - Muslim bigots. Shockingly, there have been multiple incidents where Left wing groups have sided with the Islamists. Even when they have not gone this far, these reformers often come under reproach from so called Liberal Westerners. In an in infamous and disturbing case, Maryam Namazie, Muslim reformer and feminist, was harassed by Islamist hecklers when she spoke at Goldsmiths College. This is unsurprising. What is surprising is that the Goldsmith Feminist Society, the LGBT Society and the Student Union released statements where they expressed solidarity with the harassers. I have embedded the video of the incident.

The Goldsmith Feminist’s society’s response can be found at this link.

Part of it reads as follows:

"Goldsmiths Feminist Society stands in solidarity with Goldsmiths Islamic Society. We support them in condemning the actions of the Atheist, Secularist and Humanist Society and agree that hosting known islamophobes at our university creates a climate of hatred."

A link to Emmanuel Todd the French thinker’s piece of apologia for the Charle Hebdo murders:


A Cathy Young piece on Glen Greenwald's response to the Charlie Hebdo shooting.

Glenn Greenwald Versus Charlie Hebdo: On the Wrong Side of Freedom

A random example of an extreme Left website calling the murdered Charlie Hebdo cartoonist racists. Though this is not a prominent commentator, I include it as this sort of thing is all over the Internet.

In the Wake of Charlie Hebdo, Free Speech Does Not Mean Freedom From Criticism

Sam Harris interviewing Ayaan Hirsi Ali on the subject. I should note that I do not agree with Harris or Ali on everything that they say about Islam.

Lifting the Veil of “Islamophobia”

A piece about Sam Harris on the subject.

Criticism of Islam Is Not ‘Islamophobia’

This is a good piece on the Muslim Reformers

The Islam reformers vs. the Muslim zealots

There are many more examples.


In addition to the above, I have a collection of screenshots from Twitter of insults and enraged as well as polite responses that defend oppression when it is committed in the name of Islam. These are typically responses to protests of practices such as forced Hijabs,  Guardianship Laws, floggings for adultery as well as criticism of text in the Koran. I must note that I never stereotype Muslims or even Islam in general. I also commonly condemn discrimination and violence aimed at Muslims. I understand that angry people on Twitter is only anecdotal evidence, however, combined with all everything else it establishes a pattern. I will be happy to share more screenshots in my comments section upon request.

The following response is polite, but it is bewildering. Thus I do consider the below an intellectual disagreement. Though Tweets are not evidence and it is easy to find a few folks with extreme ideas, the below is fairly typical of what I have encountered and fits in with the other sources that I have provided. 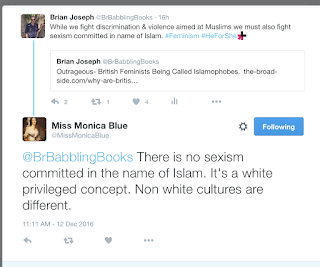