Bloodlands: Europe Between Hitler and Stalin by Timothy Snyder 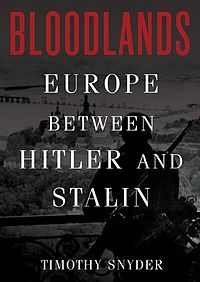 The world can be ugly and brutal. Timothy Snyder’s Bloodlands: Europe Between Hitler and Stalin subject is Eastern Europe in the 1930s and 1940s and the impact that both Hitler’s and Stalin’s murderous policies had on the population of the region. This time and place was as ugly and brutal as it ever got. The book is remarkably well researched and morbidly fascinating. It is also a difficult and troubling read. The subject of this book involves what are likely the darkest and most disturbing events in human history. This work catalogues killings upon killings. Tales of mass, intentional starvations, torture, and sadism abound here. Most distressing is the scale of death involved.  Not hundreds, not thousands, not even millions, but tens of millions of people were murdered and exposed to atrocities. This was perhaps the worst mass murder and in world history (I say “perhaps” as some scholars contend that the Mongols killed more people in the 13th and 14th centuries). It encompassed the Holocaust as well plenty of other barbarisms.

For those who are not familiar with Stalin’s crimes, he perpetuated horror on a comparable scale to Hitler. He practiced intentional mass starvations, mass shootings as well as multiple terror campaigns that were actually the model for many of the crimes perpetrated by the Nazis.

As is often the case with insightful and well thought out books, there are many themes to contemplate here. One particularly important strand in the narrative is the exploration of the motivations behind the mass atrocities. From my experience, I find that that many people think of Hitler on very simplistic terms as “a madman who was trying to conquer the world.” I often encounter those who no nothing of Stalin. Some of those who know just a little bit about the Soviet leader have a vague notion that he was an evil dictator who liked to kill people (he was, but there is more to it).

As Snyder explains, both leaders pursued their own “Utopian Ideologies”. Stalin was attempting to collectivize agricultural production over a vast area, encompassing a huge population. A little later the Russian dictator began what is known as the “Great Terror”, the goal of which was to eliminate potential internal support for foreign invaders. These campaigns added up to an attempt to eliminate entire social and political classes, first through a planned, intentional famine, and later through a state sponsored terror, culminating in mass executions and nightmarish forced labor.

Hitler was attempting to establish a vast eastern empire, mostly for its agrarian potential. His plan was to exterminate and enslave the enormous populations currently occupying this segment of the earth. He envisioned a huge expanded Reich, stretching from Siberia to the Rhine that would be a paradise for the German people. Hatred for Jews was an added political and social motivator.

The result was genocide (this is a term that, as Snyder explains, he prefers not to use), untold misery, and the blackest moments in human history. Partial blame for these horrors can be laid upon fanatical, un-skeptical and uncompromising devotion to these ideas. These were belief systems so ill conceived and uncritically accepted that they led unspeakable horrors on a barely imaginable scale.

I do not want to give impression that I believe these crimes were committed solely because of mindless adherence to ideology. There were many other reasons, some connected and some not so connected to these horrendous philosophies. Ingrained racism and anti- Semitism, the depravations of First World War, the cult of personality, etc. were also major factors. However, one important lesson here is that blind faith in uncompromising mindsets and plans, reinforced by unceasing propaganda, can lead to terrible consequences.

Those interested in further reading into the hell that the world descended into during this era might want to try Niall Ferguson’s The War of the World. Though this is another book that is not a cheery read, Ferguson details the surge in killings and violence that occurred in the first half of the twentieth century and attempts to identify its causes.

Joe Stalin just doesn't get enough credit in the annals of evil. No matter how you measure it--suffering inflicted, lives taken--he can match up with anybody. I think reading about Hitler and Stalin together in the same book would be too depressing to contemplate. One at a time, you can dismiss them as a fluke, but to think of them as contemporaries, you realize we're just prone on some level to lining up behind these lunatics.

Thanks for the feedback. Actually reading about these two makes me feel better as Gingrich and Romney do not look so bad all of a sudden. Snyder does discuss how Stalin's and Hitler's individual ideologies played against each other and helped to enable both dictators.

Sounds like a great book. I think my father will love to read this. He's always been interested in these kinds of books. :-)

Thanks for your feedback Kate. While dark, the book really describes a critical piece of the puzzle if trying to Understand World War II.

This is right up my street. I've been intending to read it for quite a while now but wonder if its just a little TOO bleak, even for me (and believe me I've read some bleak books in my time).

Well it is dark, and it does not even end on any kind of high note.

Having heard great things about this book over at Dwight of the U.S. A Common Reader's blog and elsewhere, I'm glad to see you vouch for the book as well, Brian. I understand the comparative approach to Hitler's and Stalin's mass murder campaigns have ruffled a few feathers here and there, but everything I've heard about Snyder's scholarship makes it sound like a must read for understanding. Thanks for the review.

Hi Richard - This really is a well researched and unbiased book.

I often here people argue about who was "worse" Hitler or Stalin. Also there are those who object when someone tries to compare one to the other as they will contend that one, usually Hitler was so much worse. I think that such debate is a bit silly. Both committed monstrous acts beyond belief. Lets just hope that the world never sees leaders such as these again.