I Married a Communist by Philip Roth


I Married a Communist is one of Philip Roth’s  “Zuckerman” novels. It is the seventh in the series. Over the last few years I have been working through this sequence and reading the books in order. I love these works. 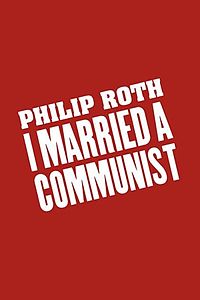 I have immensely enjoyed everything that I have ever read by Roth. His writing contains multiple insights into people and the world. His wit, as well as his characters, are often hilarious. When he is tragic, it is devastatingly effective. The tendency is moving toward tragedy, and less lighthearted playfulness in the Zuckerman Series, as the books progress and the characters age. His writing style is easy to digest yet not simplistic. His structured plots are artfully interlaced with complex and thought provoking themes.

Though a “Zuckerman” Book, Nathan Zuckerman is not the main character in I Married a Communist. Instead, he is more of a bystander influenced by the main players, as well as an interpreter of their actions. The protagonist here is Ira Ringold, an unsophisticated Newark tough, who goes off to fight World War II, and who becomes seduced with communist ideology. When Ira returns from the war, he eventually finds success as a radio actor and marries into upper crust American society. Ira is not a menace to America, he is no spy or saboteur, just an very overbearing and naive ideologue. Ira is eventually brought down less by McCarthyism, then by a terribly dysfunctional relationship with his wife and stepdaughter.

The Zuckerman books are full of interesting themes. I will mention that some readers have found that these works become repetitive. Roth has come under criticism for this perceived redundancy. See the below link to a New York Times piece about Carmen Callil’s opinion on this and other issues. Callil contends, among several complaints, that Roth repeats himself. While in a way, Callil has a point, I ultimately do not agree with the conclusion.

Roth does tend to explore similar or even the same themes over and over again in the course of many books. In my opinion, in Roth’s case, this is not a flaw. Like the composer of a complex piece of classical music, who starts with a musical theme and repeats it in a variety of forms over the course of the entire work, Roth imaginatively and expertly looks at several aspects of the human condition from multitude of angles and points of view. He accomplishes this over a series of books. Like the composer who restates a chosen theme using different keys, emphasis. tempo, etc., Roth takes an idea, and applies it to various people and situations that may be too diverse to fit into one novel.

One of Roth’s most important reoccurring motifs is the concept of human identity, or the way in which a person and others thinks about “self”. Roth’s thinking about what it means for a person to have identity owes much, to both Shakespeare, who is often referenced directly and indirectly by Roth’s characters, and F. Scott Fitzgerald, particularly the  Great Gatsby’s conception of the American propensity to reinvent and shift identities.

How precisely does Roth explore identity? In I Married a Communist, the various characters try to establish their identities, slip in and out of identities, hide their identities, fake identities, and finally have invalid identities forced upon them by others. The later sub - theme; that of having a false identity forced upon you, fits in well with the era described here. Most of the narrative takes place of post World War II America, when a multitude of non - communists were falsely accused and identified as being communists. The way that Roth weaves together this complex lattice of character and identity, as the various personalities evolve and interact, is a wonder.

For instance, I Married a Communist’s character of Eve Frame is born and raised Jewish. As she becomes accepted in the White Anglo Protestant world of mid twentieth century upper class America, she hides, perhaps even from herself, her Jewish origins, and actually develops real feelings of anti – Semitism. Later she is indifferent to the fact that her husband is a dyed in the wool communist (not someone who is falsely accused, but the real thing). Later still, she changes her “self” again and poses as a right wing, flag waving, anti –communist patriot, but privately admits that this position is just an act. Eve’s shifting persona interacts with a variety of others, who also share the all too human trait of having shifting, false, and misinterpreted selves.

My advice for anyone wishing to delve into the Zuckerman books is not to start I Married a Communist since it is late in the series. As a “Completest”, I would start at the beginning with Ghost Writer. The first four novels can actually be found in one volume as Zuckerman Bound. If one definitely does not want to read all the books, American Pastoral can be read standalone (Nathan Zuckerman is not even the main character in this one either), and is well worth it.

I have two more books to go, The Human Stain, and Exit Ghost cannot wait to get to them!

I have this one at home but I haven't read American Pastoral yet. Maybe I should take your advice and start with this one. Or maybe not, saving the best for the last one.

I loved The Human Stain and Exit Ghost is on the shelf. (actually, it's July selection for our Book Club, join us for the readalong if you'd like to)

I had a lot of fun reading Portnoy's Complaint and writing the review.

It sounds like the book club reading of Exit Ghost might be a fun thing to participate in. i have heard that this book makes references to Ghost Writer with a major character returning, thus it might be a god idea to read that one first. It was superb book in its own right.

I have not yet read Portnoy's Complaint, its reputation, as well as your review, make it sound well worth it. I will surely give it a try when I have finished the Zuckerman books.

I prefer the Zuckerman from the 'Zuckerman Bound' trilogy to the Zuckerman from the 'America' trilogy (which, nevertheless, is a finer work of literature): funnier, more neurotic, more irresponsible, more honest about himself. The older Zuckerman is a bit dour, and I even wonder why he's in this trilogy. I've still got 'The Counterlife' and 'Exit Ghost' to go - I didn't read them in order, I regret that now.

Miguel, I agree, the younger Zuckerman was funnier and more interesting.

As for why he is even in the later books, I think, particularly in American Pastoral, that Roth is saying something about how we wrongly perceive people, and he is doing it though the erroneous perceptions of Zuckerman. We know Zuckerman got the Swede "wrong" initially. The perfect and unflappable All - American with a bland life that Zuckerman thought that the Swede was, turned out to be wrong.

I think that a point missed by many, was that the entire narrative that makes up the bulk of American Pastoral is also likely not what "really" occurred. Once again, it is Zuckerman's revised interpretation of events, based primarily on a relatively short conversation that he has with the Swede's brother.

That's an interesting interpretation; it had never occured to me, but indeed Zuckerman acts there as an omniscient narrator, only he may not be very credible.

From what I understand, 'The Counterlife' also deals with unreliable narrators.