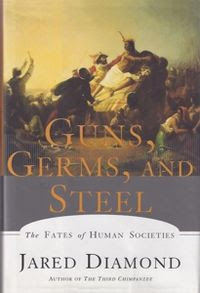 Jared M. Diamond’s Guns, Germs and Steel, is one of those books that sets out to prove a theory. It is also one of those books that span over four hundred pages proving a theory that could be encapsulated in less then one hundred pages. This is not a criticism; I am very glad that it did take Diamond this many words to reach his conclusions, as the journey was just as fun as arriving at the final destination.

Diamond’s hypothesis is in three parts. First, is the somewhat obvious contention that certain societies, especially, those originating in Eurasia, easily conquered and dominated other societies, particularly those in the Americas, Africa, Australia and Polynesia, due to the former having more advanced technology, as well as resistance to lethal diseases then did the latter.

The second part of the theory is that these Eurasian societies gained these advantages as a result of more organized and efficient farming and herding methods. These advanced agronomic systems led to greater population growth, advanced technology and greater societal organization. Furthermore, these cultures developed a system where humans basically lived side by side with domestic animals. This human-animal proximity resulted in the formation of deadly diseases, and eventual immunity to those diseases.  It also turned the peoples of these societies into biological weapons. When Europeans and Asians encountered people who had little or no exposure to domestic animals, waves of epidemic and death resulted.

Finally, Diamond attributes these advantages in agricultural systems and Animal husbandry    almost entirely to differences in geography, climate, and biological diversity in various parts of the world. Eurasia harbored a mix of wild plants and animals that was much more conducive to the development of agriculture and animal domestication, then did the other landmasses. In addition, the climate and geography of Eurasia helped the development and spread of cultivated plants and domestic animals, more so then did the climate and geography of the other continents.

As I stated above, Diamond could have written a much more concise book. Instead, he chose to write a highly detailed and intellectually rich chronicle of early agriculture, pre-historic mass human migrations, linguistics and a whole lot more. If one approaches this work eager to learn about the world and how our planet and peoples reached their present state, one will find Diamond’s book a delight.

I must admit, fairly early in Guns, Germs and Steel, when Diamond began to explain in great detail, specifically how peas and other crops were developed, I had, for a moment or two, the temptation to begin skipping sections. This book really goes into detail on some very arcane subjects. Did I really want to spend time reading multifarious facts about how horticultural processes developed? I stuck with it. I read every word. Before long I was hooked! I not only discovered how the modern pea was developed, but how shellfish hooks were invented and how Llamas were domesticated, plus how lots of other stuff came to be. In the process I did not just absorb some obscure facts. I learned a little bit more about how people think and how humans accomplish things. I also learned much about the origins of the peoples of the Philippines, China, South Africa, and many other places. I absorbed lots of other things too. Perhaps most importantly, I see a little bit clearer, and am thinking about, how this all connects with the totality of the human story.

This is what reading should be about. I believe that delving into such details along the way, maybe details that one originally never intended to dig into, is one of the paths that needs to be trod in order to think and to reason more deeply and coherently. I think that if we restrict ourselves too tightly to what we think that we are just very interested in, we risk missing out on entire worlds. The experience of reading this book really brings this concept to light.

Getting to the main point is not the only thing that reading, discussing and thinking, should be about. Experiencing the entire process, with all its diverging details, connections and paths, is a necessary and joyful way of getting a better view of the big picture. It is all part of reaching a better understanding of people, as well as fascinating web that we call existence. It is also fun! For those with an insatiable curiosity about such things, Guns, Germs and Steel is a great choice.
Posted by Brian Joseph at 7:20 PM

This was one of my favorite books as well. It subtly changed the way I looked at the grand sweep of history. If your tribe developed in a place without a cultivatable grain crop or domesticatible animals, you're stuck with hunting and gathering, until some farmers show up to shove you aside. The funny thing is that agriculture doesn't always lead to an improved quality of life--but it does lead to a greater population, which wins out in the end.

An interesting point of the book, is that societies that did have agriculture, but had less versatile and adaptable plants and animals, usually fell behind the societies with the "better" plants and animals. In terms of building a civilization, cows are better then llamas!

I loved this book; it opened my eyes to many things, and, like you say, it's full of informative trivia. One of my favourite chapters was about language and the alphabets and how they spread across the Mediterranean.

Yes, the information on the alphabets was fascinating. What is striking is how infrequently that humans invented new alphabets from scratch. Diamond indicates that it may have only happened twice, in Samaria and Mesoamerica respectively.

I've been meaning to read this for ages, but it keeps escaping the TBR pile. It sounds like such an ambitious book, but it seems Diamond has succeeded in his project and written a fascinating exploration of history. I must try and get around to reading it.

Though i have not actually seen it, there is a PBS series based upon the book. Watching it might be an alternative if, like myself, one has so much to read and so little time! The link to the show is : http://www.pbs.org/gunsgermssteel/index.html

I think this video is of more value to someone that has also read, Origin Of The Family, by Engels. I promote it, because I hope it prepares people to understand Marx materialist conception of history. Engels over 100 years ago, in his book Origin, came up with many of the ideas Jared develops. But Engels goes into more detail about how a super abundance of food, had to be reached before slavery could be economical. A super abundance of food, made the first class divided society possible, made ecno0nic inequality possible.

I must add, I only watched the video, and do not know how much the video leaves out from the book, or whether it does the book justice.

I will quote Engels speech at Marx funeral to point out why I see so much similarity in Jared's thesis, between him and Marx.

Just as Darwin discovered the law of development or organic nature, so Marx discovered the law of development of human history: the simple fact, hitherto concealed by an overgrowth of ideology, that mankind must first of all eat, drink, have shelter and clothing, before it can pursue politics, science, art, religion, etc. that therefore the production of the immediate material means, and consequently the degree of economic development attained by a given people or during a given epoch, form the foundation upon which the state institutions, the legal conceptions, art, and even the ideas on religion, of the people concerned have been evolved, and in the light of which they must, therefore, be explained, instead of vice versa, as had hitherto been the case." (Frederick Engels, "Speech at the Grave of Karl Marx" 1883)

Hi Frank - that is a very insightful quote.

I must admit that my understanding of the details of Marxist thought, that is beyond the basics is sketchy. IBased upon the quote it does seem that Marx understood something about the long term development of human civilization.

It seems to me that one thing about Jared's basic ideas is that he does a lot of borrowing from thinkers of both the present and the past.