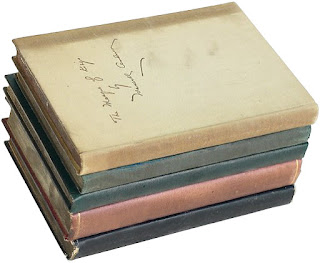 I like to make and to keep lists. For instance, as a food and beverage lover, I keep lists and notes on every artisanal cheese and craft beer that I sample. Similarly with books that I read, I maintain a list. I do this in order to keep track of the important works that I have explored.

There are rules for what is included on my list. Some of these guidelines were set years ago that I subsequently regret, but I feel that it is too late to alter the rules.

My catalogue only includes fiction and anything that can be loosely defined as philosophy. In retrospect, I wish that I had included history, science and other non-fiction efforts. However, it is unlikely that I would remember everything if I attempted to go back and fill in the blanks.  It also only includes works that I attempted to read deeply. I need to have endeavored to learn something from the author, as well as tried to connect the ideas presented to the world at large. If, for instance, I rushed through a book in collage just to get a paper written, and I have not read it since, it is not included in my catalogue. This means that the list is mostly confined to writings that I have attempted to conquer from around my mid twenties on. As I am forty-four years old, it represents a little less then twenty years of reading. There are some worthy authors that I read when I was young and somewhat unaware, that I just did not “get” at the time. These are not included. I would like to reread these books soon and thus add them to the list.

Also, in order to be included, the book, essay or story must have had at least a little artistic or intellectual merit or importance, at least in my eyes. Therefore, there are a small handful of works that I have read, that I have found to be lacking in any value or meaning that are not included. This is not to say that I have liked everything listed here, only that it has some value in my opinion.

Pretty impressive list and a tight set of rules. I couldn't do that, I'm too lazy. You have a lot of SF

Ps: you know we have more than three hundreds kinds of cheese here?

I have actually just kept it up over the years with minimal effort. The rules were just a way to know what to write down and what not to write down. As I mentioned, I wish that I had kept up with the other genres.

From about 12 years old to about 22 I must have read hundreds of science fiction books. Alas, I do not feel that I understood enough about underlying themes, symbolism , etc., as well as the world in general, to really understand what the authors were trying to say in order to justify including them. Of course, some of it was really bad! I am slowly going back and rereading the books that I think were worth while. As the place where I started, I have a special place in my heart for science fiction.

I know that France is simply the best place in the world for cheese! We get some of your great ones here. I even ate some Morbier this evening! However, the US has really oppressive laws involving cheese. Long story short, some of the greatest French cheeses are unavailable here due to irrational regulations. For instance, it is illegal to sell Brie or Camenbert in the United States. (For my American readers, the factory produced, foul tasting product labeled Brie that is found in American supermarkets is not even the same type of cheese as Brie).

There is actually a great book written by Steve Steven Jenkins titled The Cheese Primer. This marvelous work really delves into the history and culture of cheese as well as World Food Culture in general. I am considering devoting a blog to it. It is however, primarily aimed at the American Cheese buyer.

Alas, the European Union (and the British, I dare say) are after our cheese made with unpasteurized milk.
I'd say the Americans would be better off with real Camembert than they are with their meat full of hormones. But that's another story...

Thanks for the tip, the Blog looks great!

I have heard that they are out to get your great cheeses. You must fight them in the name of civilization!

Sadly, hormones in the meat are just the tip of the iceberg over here. Many of my fellow Americans have fallen in love with all sorts of artificially processed, so called foods, filled with industrial produced chemicals. However, there is a counter movement. For instance, one can easily find meat without hormones, but it is very expensive.

I'm not a list maker and I have no memory of a lot of the books I've read, not until someone mentions a title or theme which rings a vague bell in my mind. How much better it would be to have a list and to know for sure what I've read in the past. :)

I find that remembering books is not too bad. As I alluded to above, I really enjoy sampling various cheeses and beers. Keeping lists and notes on those foods are indispensable for both recalling as well as understanding and comparing. I find that after a few years that I sometimes I completely forget that I tried something!