The Cheese Primer by Steven Jenkins 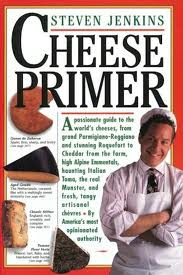 One might have an initial impression that this is a very unusual book commentary to be found on this blog. However, those who have read, or even perused, a bit of The Cheese Primer by Steven Jenkins will know that this work, aside from being a gastronome’s delight, will fit right in with many of the other writings explored here. It is, after all, a book about history and culture as well as an important exposition and commentary on the ubiquitous human activity known as eating. Jenkins even expounds upon what I would define as a food philosophy here. This nifty book can be used either as a reference utility for both the novice and the experienced cheese buyer, skimmed for its most interesting content, or even read from cover to cover.

Jenkins is one of America’s foremost experts on cheese. He was the first American invited into the prestigious Guilde de St. Uguzon and he is a Chevalier du Taste-Fromage. What does that mean? It means that when it comes to cheese, Jenkins is internationally recognized as knowing his stuff! Jenkins also runs the cheese buying and retail operations at Fairway Market. Fairway is a small chain of specialty food markets located in the New York City area. One of the best things about Fairway is that I am fortunate enough to work near one! Fairway’s cheese department is one of the best that I have encountered in America.

One of the most negative things that I can say about this book is that it has a terrible title! “Cheese Primer” has dull connotations. If a prospective reader did not know any better they might suspect that this was a dry and soulless catalogue. Instead, Jenkins has mapped out a wondrous journey for anyone inclined to indulge in this delicious form of fermented milk. This is a highly recommended read for anyone who loves and wants to understand cheese, as well as for those who are interested in the history and culture of food.

In the first several chapters Jenkins enunciates a little bit about himself and how he became an expert on this subject. He then spends some space discussing some fascinating technicalities as to how cheese is created. Subsequent chapters are broken down by country. Each chapter is devoted to a different cheese- making nation. The major producing nations have chapters subdivided into regions. Along the way he gives us a little bit of the history of each cheese-producing region and how the area’s history, food and culture relates to cheese. Jenkins then proceeds to provide solid cheese buying advice to the consumer. As a reference source, the book is mostly aimed at the American cheese buyer.

Jenkins falls all over himself when discussing France. As he puts it:

“France, for me is a glorious wonder. But what astounds me most – French history, custom, and style aside – are the cheeses”

The author later goes on to describe the slightly less incredible cheeses and their cultural connections in Italy, the UK, Spain, Germany, etc.

Jenkins does turn his eye to American cheese producers. Despite being the home country of giant conglomerates that make bland mass produced foods that are sometimes not even legal to call cheese, America has a burgeoning artisanal cheese industry. Small farms making world- class cheese from cows, sheep and goats are popping up in all fifty states. In part thanks to Jenkins’s book, whenever my wife and I visit a part of America away from home, my we make it our mission to visit a small cheese farm or two in that area. Many of these farms welcome visitors. What we find on these outings are educational, and most importantly they yield delicious results!

Jenkins also has important things to say about modern food industry and culture. The author is opinionated. I happen to agree with most of his views. Jenkins points out that artisanal cheese production and consumption is diminishing throughout the world. Great cheeses that have been produced for hundreds of years are becoming extinct.  He is highly critical of the mass produced factory cheeses and imitation cheese products that consumers in America and elsewhere now consume in copious amounts.

In Great Britain, he tells the story of how government control of the dairy industry distribution channels devastated and nearly extinguished that nation’s artisanal cheese producers in the mid twentieth century. Jenkins is highly critical of American food laws that both prohibit the sale of some of the world’s greatest cheeses as well as stifle American artisanal cheese producers. He decries the new mass produced Spanish cheeses that are crowding out age -old artisanal cheeses that are far superior. One of the saddest passages in the book occurs when Jenkins explains that the mass-produced, plastic covered cheese found in supermarkets that is labeled “Edam” is no such thing, and that production of real Edam in the Netherlands is completely extinct. He writes,

“As for Edam – Simply consider it lost to us for all time”.

Ultimately, this is a book that champions the culture and joy of real food over the artificial, food products that have invaded many people’s lives. Jenkins is saying something important about the modern world here. Mass produced corporate food is diminishing our lives and our cultures. It is destroying much that is good and wonderful.

I am very much with Jenkins. I do my best to find and appreciate real foods made by small producers that are fashioned with love. I always prefer such foods to mass produced factory products. I lament the fact that so many people in America only know factory made foods. Many folks actually prefer processed foods that are filled with salt, processed sugar, Monosodium Glutamate, hormones and who knows what else, to the real thing made by small producers in the right way. My own theory is that constant exposure to insipid and simplistic sensations ruins our appreciation for strong, genuine flavors such as biter, sour, nutty, musky, etc. Thus, when people try food that contains these real flavors the experience is initially too strong and complex for them. We need more evangelists like Jenkins to help keep the authentic alive in the face of a massive onslaught by the plastic and superficial.

Some people have told me that various trendy self-help books would have an enormous impact upon my life. Others have assured me that certain religious texts would lead me to great epiphanies. Alas, none of these tomes have brought me the promised life altering benefits. However, as the book that jump started and continues to fuel my interest and love of cheese, The Cheese Primer is the manuscript that finally did change my life in ways that so many others have promised!
Posted by Brian Joseph at 8:49 PM

You are very right, I was surprised to see this book here but at first I didn't even think it would really be about cheese.
Living in the country which is said to be THE cheese country, I can well understand the fascination, I've also seen how it is done, close up and it is interesting.
I personally love cheese in almost every variety and it's the only reason why I couldn't be a vegan. I just like it too much.
I also like intellgent food memirs or memoirs of chefs because there is such a lot that can be see through food and analyzed.
There is some artificial tasting cheese out there but luckily here in Europe we still mostly buy it from the big counters, freshly cut. You have to eat it within a day or two as it's free of preservatives. I wasn't aware how far from the source eating is by now in the Us until I read a review of Barbara Kingsolver's book about food. Sad.

Hi Caroline - I must admit I envy the you for living in a nation which such a variety of real food. My wife's relatives recently visited from France and we had some interesting discussions about food.

Actually here in the New York area we have access to all kinds of genuine and high quality food. However, one does need to make a little bit of an effort even here. My wife and I eat almost no processed or even what I would consider "low quality" food. We also make most things from scratch. We really have no problem finding the right foodstuffs. There are parts of America where one has a great deal of trouble even finding what I would define as real food.

I have not read Barbara Kingsolver. Looking at some information on her books it seems that they are about what we are talking about. They look good. There is a little push back from some quarters here and it looks as if Kingsolver is part of that movement.

My wife read the "Omnivore's Dilemma" by Michael Pollan. Based upon what she has told me, it seems to look at the big picture concerning these issues.

Seeing as how I'm a vegan and an animal rights advocate, I expect you alrady know what I think about cheese. Plus, it smells horrible. :)

Ha Ha Violet- . Does it all smell that bad?

The small cheese farms that I have visited in America seem to be very interested in treating the animals well. They seem to have plenty of room and allowed to graze freely. Almost none of them slaughter the animals. This seems to reflect a philosophy among small artisan cheese producers in America. These small producers are very different from the norm.

I admit that there could be things going on at these operations that I do not know about.

I am aware of the horrors involved with conventional animal farms.

Caroline, if you enjoy memoirs of chefs, I loved two in particular that I would highly recommend. One is Julia Child's story, titled "My Life In France" and the other is "The Apprentice" by Jacques Pepin. You are very fortunate to be living in France, for so many reasons. As Brian says, though, if one has to live in the US, New York is the place to be. The diversity of cultures in this area allow for a vast array of quality gourmet foods and ethnic ingredients to fill up our shopping bags. We do have wonderful cheese shops, and I love cheeses, all types. I only wish that we could enjoy some of the ones that are produced in France but banned from the US. I can only imagine the amazing tasting experience those must be, you're a lucky girl.

Jacques Pepin is my favorite "TV Chef". i like him so much better then most of the new Celebrity Chefs. He has a certain style and genuineness that is unsurpassed. Of course Julia Child is a legend. My memories of her TV shows stretch back into childhood.

Thanks, Cat for the suggestions. I'll track them down.
Oh, I'm not moaning, from a culinary perspective it is nice to live where I live. And even for some other reasons.:)