Coincidence and Connections: Heinlein and Saramago

The protagonist of the novel is a man with has lost his left hand but who possess several prosthetic limbs designed to complete varying specialized tasks. 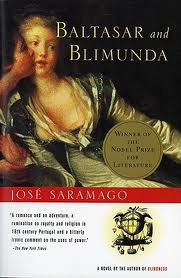 I generally read two books simultaneously. The books that I am currently reading, at least on the surface, seem to be very different and were written by authors who came from very different literary circles. The novels are Baltasar and Blimunda by Jose Saramago and The Moon is Harsh Mistress by Robert A. Heinlein. To my surprise the above sentence perfectly describes both books! It seems so very strange to me that purely by chance I should be reading both works simultaneously.

Baltasar Mateus, one of Saramago’s main characters, is an eighteenth century ex - soldier who lost his hand in battle. A blacksmith has made him two artificial hands. One manmade hand ends in a hook, the other in a spike.

Manuel Garcia O'Kelly-Davis, Heinlein’s hero, is an inhabitant of The Moon during the 2070’s. Having lost most of his lower arm in an accident, he possesses six high technology artificial limbs, each one    specially designed for specific functions. 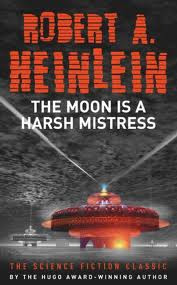 Though the missing appendages seem to me to be symbolic in both books, I think that the symbolism is different. Saramago connects Baltasar’s missing hand with a purported missing hand of God. Heinlein’s protagonist’s artificial arms point to the future interface and common fate of humans and technology.

This odd coincidence has gotten me to thinking, are there other similarities between these works and authors?

On the surface Jose Saramago’s Baltasar and Blimunda and Robert A Heinlein’s The Moon is Harsh Mistress are wildly different books. The authors also seem to be very dissimilar. Saramago could be described as a being a supporter of the political and social left wing. Heinlein, at least during the period that he wrote The Moon is Harsh Mistress, expressed strong Libertarian ideals. These days, at least in America, Libertarianism is, perhaps inaccurately, associated with the political right wing.

Looking at things a little differently however, both books and writers do have some similarities. As per Wikipedia, Saramago advocated “Anarchist Communism.” This belief system rejects government, laws and most institutions including capitalism. It champions people working together in commune like groups.

In The Moon is Harsh Mistress, Heinlein pushed his own philosophy that he coined “Rational Anarchy”.  This belief system also rejects government and laws. It advocates that society works best when individuals are free to decide their own morality and course in life. Unlike Saramago however, Heinlein’s philosophy was very pro capitalist and scorned collective groupings of people.

Though I have not yet completed either work, both books seem to clearly champion the respective authors’ respective beliefs.  Not surprisingly, each novel also has a strong antiauthoritarian streak. Both contrast a corrupt and selfish elite with a somewhat virtuous common people. I also detect feminist themes expressed in both books. While in many ways different, these ideologies clearly have much in common.

Both writers, now deceased, were contemporaries. I wonder if Saramago and Heinlein knew of each other. They seemed to inhabit very different intellectual worlds so it seems likely they may have not been aware of one another. I also wonder if anyone else ever compared these two works. It is such an unlikely coincidence that I should be reading both at the same time.

I am a person who likes to find connections in the world. It can be a fun exercise to compare seemingly incongruous philosophies and thinkers. It amazes me what I find even when I do not try too hard!

I will provide thorough commentary on both books in few weeks when I finish reading them.

I usually read two or sometimes three books at a time, and it's odd to come across those connections that seem to occur by accident.

I recently read Max Barry's Machine Man about a scientist who gradually replaced his body parts for more efficient artificial limbs. That was funny (once you got over the idea of limb replacement) but it doesn't sound as though these are funny at all.

Hey Guy - Actually while not exactly funny, Heinlein's book has a lot of cynical humor in it. Saramago's work is more serious.

I guess that I tend to gravitate towards works that express a writer's life philosophy, therefore at times there will be things to compare between books that I am reading concurrently. The missing hand thing just seems weird.

I agree: that is weird. Cosmic forces are at work....

It is quite a strange co-incidence to be reading two random books with such parallel themes. I like the sound of Anarchist Communism, although human nature always seems to get in the way of any large-scale experiment in true communism and people end up in a totalitarian nightmare.

I wish I could get interested in science fiction, but I think I'm just too much of a realist to let my imagination fly. :)

Hi Violet - I find that I too am more sympathetic to left wing political philosophies then to right wind political philosophies evan when they are unworkable. I believe that the best answer is a mix. That is a mostly capitalistic system with healthy doses of social and government intervention and control when appropriate.

One thing about Heinlein's book is that in terms of technology at least it is reality based. A large mining operation on the moon is both economically and technologically feasible in the mid term future.

First of all, I'd like th thank you for your supportive comments about my "Deat of a Beautiful Dream?" post. It really means a lot to me that someone understands how something like this could be so upsetting!

Now, as for this post on Saramago and Heinlein: in one word -- FASCINATING. (As Mr. spock would say, lol.) What an interesting coincidence, indeed! I wonder, too, if these two authors were aware of each other, although their respective philosophies are somewhat different.

I have heard of both of these authors, of course, but must sheepishly admit that I have not read any of their books...

Thanks for this very interesting post! I will certainly be looking forward to your reviews of these books!! : )

Hi Maria - Don't feel bad about not reading these authors. There is so much out there to read! It is really impossible to get to everything! As I know that you like science fiction, I do think that you might really enjoy Heinlein.

A Google search on my part found no connection or meetings between the two. I could be way off on this one, but I suspect they would not have had great chemistry between them. The philosophies, though few of parallels can in some ways be seen as antagonistic.

I've read José Saramago extensively, and even if some close to him have declared he was a fan of science fiction (allegedly John Wyndham's The Day of the Triffids influenced Blindness), I'm sure I've never read him mention Heinlein in any text. That's not to say the connection doesn't exist, but I think your mid is just playing tricks because of the coincidence :)

As for Saramago and Heinlein's political views, what I find amusing is how both stem from a suspicion of the State: libertarians think the State is trying to stiffle Great Men, and the communists think the State is a tool of the bourgeoisie to keep the proles under control.

I think Saramago had many good ideas about human dignity, justice and democracy, but I don't put a lot of stock in his utopian world brotherhood of men and women living without laws.

As for Heinlein, never read him, but The Moon is a Harsh Mistress has been on my tbr list for years.

Hi Miguel - I actually do not believe that the two authors know of each other. I just thought that it was an interesting co — incidence.

Heinlein's ideology was a little different from some of the other Libertarians. He seems to be saying that the governments suppress the positive but unconscious social and economic results of the actions and choices of the masses. He was much less elitist then some other Libertarian thinkers.

I also do not agree with the gist of Saramago's ideology. However, it is another interesting and creative set of ideas for us to ponder and discuss!

Interesting co incidence indeed..I must say i have never read Heinlein thanks for introducing me to him..While saramago i Hve read Blindness and The elephant's journey, I should definitely try this one...
Thanks again and keep posting all these wonderful author's work..

Thanks VB - This is the first Saramago book that I have read. As I mentioned above I saw the movie "Blindness". As I found it a bit disturbing but superb, it sparked my interest in Saramago.