The Anti - Christ by Friedrich Nietzsche 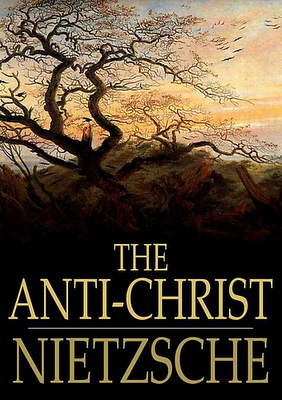 The Anti - Christ is the forth work that I have read by Friedrich Nietzsche. My recent commentary on On the Genealogy of Morals is here. I read the Horace B. Samuel translation of this treatise.

This book is an ideological as well as emotional, even hateful, attack on what Nietzsche perceives as the Judeo - Christian tradition and philosophy. While in some ways this is a rehash of ideas presented in earlier works, in this book the philosopher maps out this particular thesis in intricate detail.  Nietzsche describes his primary contention,

“Christianity,” which is to say, the corruption of souls by means of the concepts of guilt, punishment and immortality”

“Corruption” of souls being an effect of Christianity, Nietzsche sees modern Europeans as being motivated by guilt and punishment. As a result, modern society is riddled with weakness and decadence. He equates Christianity to anarchy. He blames it for what he perceives to be the malevolency of democracy and scoffs at the ideas that humans are equal.  He sees Christianity as the revenge and rule of the lowest elements of society. A proper society in his view would be controlled by elites, and he is contemptuous of even the middle classes,

“A high civilization is a pyramid: it can stand only on a broad base; its primary prerequisite is a strong and soundly consolidated mediocrity. The handicrafts, commerce, agriculture, science, the greater part of art, in brief, the whole range of occupational activities, are compatible only with mediocre ability and aspiration; such callings would be out of place for exceptional men; the instincts which belong to them stand as much opposed to aristocracy as to anarchism. The fact that a man is publicly useful, that he is a wheel, a function, is evidence of a natural predisposition; it is not society, but the only sort of happiness that the majority are capable of, that makes them intelligent machines. “

For Nietzsche, the problem with the concept of immortality and the afterlife is that it focuses human attention away from the reality of life, and is thus the worship of death and, therefore, abominable. He condemns belief systems that distract people from reality.

Nietzsche extolls the virtues of what he considers to be high civilization, principally the Roman Empire, as well as the Islamic Empire. He sees those societies as great, having existed without guilt and decadence. In the philosopher’s eyes, these civilizations were springs of culture, learning and science that were not burdened by ideas that make humanity weak. In addition, he admires these empires for their warrior ethos.

There are a plethora of additional arguments here, all illustrating how Nietzsche believes that Christianity and its supposed offspring, socialism, anarchy and democracy, have destroyed high civilization.

I certainly disagree with certain aspects of the Christian belief system. However, on almost every level, Nietzsche’s arguments simply do not hold water for me. I believe that human progress has resulted from a combination of ideals. These include the drive and will of the individual to succeed despite societal constraints that Nietzsche champions. However, human progress has also been driven by the tendency to exhibit compassion and charity, ideals that the philosopher treats with contempt. Furthermore, much of the tendency in people that Nietzsche defines as a “slave morality” is clearly built into our genes.

I also find many flaws in Nietzsche’s views of history, sociology and psychology. For example, he attributes the fall of Rome entirely to the spread of Christianity. He also gives too much credit to Christianity by implying that the world would be mostly devoid of charity, democracy, the philosophy of equality, etc. without it. His reasoning is, on some issues, utterly without nuance. He is full of hatred towards thought systems and people that he disagrees with. As a result, I find this treatise to often be childish and downright silly.

To be sure, Nietzsche has been influential on subsequent belief systems. For example, his thoughts have not only heavily impacted the philosophies of Libertarianism and Objectivism, but even upon deeper and more reasoned thinkers such as D.H. Lawrence and Hermann Hesse.  He does delve into extremely audacious and uncharted territory. He is opinionated and, at times, lays out interesting arguments. He often exhibits great insight. I also remember other works by the philosopher, such as Thus Spoke Zarathustra and Beyond Good and Evil as being less vitriolic as well as a little more levelheaded. However, at least when it comes to this work, for me, these attributes do not compensate for the immaturity and the flawed nature of these writings.

Quite a challenging read there Brian. To finish it and then to write something sensible about it is quite an achievement. I used to read a little philosophy some years ago but not in recent years. Your analysis of this one sounds pretty thorough but I may not actually read it for myself!

Nietzsche was so insane, I can only pity him.

Hi Tom - thanks so much! Your great site are already on my Blogroll.

Though I was mostly negative towards this work I actually enjoyed reading it. Sometimes this philosopher's rantings can be somewhat fun in an odd way.

Hi Miguel - Though Nietzsche did go insane later in life I actually do not believe him to be insane when he wrote "The - Anti - Christ". His tone was angry and he was demeaning towards belief systems that he disagreed with. In my opinion many of his judgements while bold, were faulty. Of course in my opinion the faulty reasoning is true of many of the world's thinkers.

A very interesting post, Brain.
Reading this I feel the book is dated but to some degree a very important text. I suppose to challenge Christianity like he did, at that time, was revolutionary, he just totally went over board.
Some of the argumentation reminds me of Marx who calls religion "Opium fürs Volk" - Opium for the people.
The weakness seems to be that he doesn't only discard the religion but the positive values. I agree that there is too much guilt and pnishment, at least in the Catholic faith, but undeniably there are importnat values too, like compassion.

Hi Caroline - The funny thing is - I have major problems with religion. It is odd for me to be defending it here!

As you say Nietzsche attacks the positive values. He also credits Christianity with the spawning of democracy and liberalism and condemns all of these beliefs.

Poor Friedrich. Having been brought up as a strict Lutheran and then losing his faith really did set him on a collision course with God and religion. I do think he was unwell when he wrote this. It should probably never have been published, really. His earlier works are more representative of his brilliant mind. This just sounds like the angry ranting of someone who has lost his power to reason.

Absolutely his earlier works should carry greater weight. I would say that he strings his arguments together coherently here, it it just that the venom really gets in the way with this one. Perhaps the illness was setting in.

He had an amazing madness, that's for sure. The potency and uniqueness of his writings are unparalleled in their feverish madness. It's just a pity that his ideas aren't that unique anymore, they're actually vulgar nowadays, the world has become Nietzschean, and that's not something to rejoice about.

Really good point Miguel. Though I think that the world has not become 100% Nietzschean, we have taken a few big steps in that direction.

I applaud you for reading this book. As a Christian, I would find it hard to wade through. Although I think it is interesting that even Nietzsche looked on with horror at the future he believed in. You forgot to include Hitler and Stalin as disciples of Neitzsche, which they both were.

Hi Sharon - I too find many of Nietzsche's beliefs to be untenable to say the least.

I must be intellectually honest about Hitler and Stalin. I knew that the NAZIs loved Nietzsche, I did not know about Stalin. However Nietzsche would have despised those two. He HATED anti - semites. He thought Germain culture was poisoning Europe and he strongly opposed all forms of collectivism.

totally agree with the view on Nietzsche's anti-Semitism, although his sister was one & she married
married "Bernhard Förster, a former high school teacher who had become a fanatic anti-Semitic agitator, also after returning to Germany after attempting to create a pure Aryan colony in Paraguay & failing leading to her husband topping himself.She became a supporter of the Nazi Party. After Hitler came to power in 1933, the Nietzsche Archive received financial support and publicity from the government, in return for which Förster-Nietzsche bestowed her brother's considerable prestige on the régime. Förster-Nietzsche's funeral in 1935 was attended by Hitler and several high-ranking Nazi officials.
PS. My favourite Nietzsche is Thus Spake Zarathustra

Hi Parrish - I had head that Nietzsche's sister was anti - semetic and was also a very difficult person. It is amazing how the NAZIs admired Nietzsche. While there certainly were major elements of his philosphy that were compatable with their's, there was so much that would have been hostile to NAZI idealogy.

Thus Spake Zarathustra may be my favorite too.

I think they got hung up on the idea of the ubermensch & Hitler's perception of himself in such role, also on a puerile level it gave them carte blanche to ignore any of the moral implications of their planned deeds by the removal of the perceived moral code at that time.