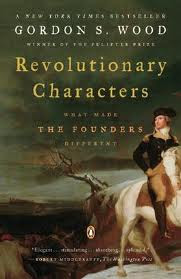 Revolutionary Characters: What Made the Founders Different by Gordon Wood is a book for fairly serious American Revolutionary era history buffs. If one is indeed such an aficionado, this is a thought provoking and fun read.

Wood’s book consists of a series of essays, each concerning a different major American Founder. George Washington, Benjamin Franklin, Thomas Jefferson, Alexander Hamilton, James Madison, John Adams, Thomas Paine, and Aaron Burr are all covered. For the most part, the pieces are not biographical sketches; instead they are analyses of the public personas of each of the men. Therefore, I would not recommend this book to readers who have only a cursory interest in the men or the era. Some of the essays, particularly the one that covers John Adams and his political theories, dig into fairly intricate concepts and issues of the time.

In several linking essays, Wood explains that the public image of these men was of the utmost importance both to the men themselves as well as the public at large. All of these men considered themselves enlightened gentleman of their times. The author argues that in this era, society did not look to or esteem private personalities. Thus, a “constructed” public personality, as long as it was kept consistent in public, was not considered disingenuous or undesirable; in fact, to some degree, private or inner character was disregarded as unimportant.

These men all spent their early years striving to become part of the enlightened elite. They rejected what at the time were traditional conceptions of hereditary elitism of the old aristocracy. Instead, the conception of a “gentleman” involved reaching, through one’s own devices, a level of education, morality and manors that placed a man above the masses of society.

“To be a gentleman was to think and act like a gentleman, nothing more, an immensely radical belief with implications that few foresaw. It meant being reasonable, tolerant, honest, virtuous, and “candid,” an important eighteenth-century characteristic that connoted being unbiased and just as well as frank and sincere. Being a gentleman was the prerequisite to becoming a political leader. It signified being cosmopolitan, standing on elevated ground in order to have a large view of human affairs, and being free of the prejudices, parochialism, and religious enthusiasm of the vulgar and barbaric. It meant, in short, having all those characteristics that we today sum up in the idea of a liberal arts education.”

In addition to striving to attain the status of a gentleman, Wood explains that the Founders highly valued the concept of “disinterestedness”.  A virtuous leader needed to be wealthy enough that they did not need to work or even concern themselves with making money. In theory, only a person who was rich enough not to have interest in the profit motive could be trusted with the reigns of government. Not all of the Founders disliked mercantilism (some, like Thomas Jefferson, despised it) but most believed that it was inappropriate for a businessperson to be a politician.

“We today have lost most of this earlier meaning. Even educated people now use disinterested as a synonym for uninterested, meaning “indifferent or unconcerned.” It is almost as if we cannot quite imagine someone who is capable of rising above a pecuniary interest and being unselfish or impartial where an interest might be present.

In the eighteenth-century Anglo-American world gentlemen believed that only independent individuals, free of interested ties and paid by no masters, could practice such virtue. It was thought that those who had occupations and had to work strenuously for a living lacked the leisure for virtuous public leadership.”

Within this framework of a disinterested gentleman, all of the Founders, either through their own machinations or through external impositions, had constructed public personas. These characters, how they came to be, what they represented, how they affected history, etc. are generally the subjects of Wood’s essays. Each piece digs fairly deep into the analysis of Wood’s subject. Having read fairly extensively on these men and the era previously, I feel that Wood’s essays provided depth as well as both familiar and unique perspectives, though I do not agree with all of Wood’s conclusions.

One of many interesting points here was that there were always exceptions to the rules. Wood argues that Paine’s public persona did not fit that of a gentleman and Burr’s persona did not appear to be “disinterested.”

As one final irony pointed out by Wood, the nation and society that these men helped to create, that of powerful mercantile interests, an economy propelled by the acquisition of material goods and common people (though only white males) participating in political and social discussion and debate, had little interest in electing disinterested gentleman as political leaders. Thus, Wood convincingly argues that all subsequent generations of American political leaders were of a very different breed from that of the Founders.

Though not an introduction to the American Founders, this work provides important and, at least for me, intriguing information on the personalities, philosophies, perceptions and accomplishments of these very important people. There are a lot of detailed and interesting musings within the essays that I cannot come close to delving into within a single blog post. Highly recommended for those interested in the period as well as in the history of government.

American Sphinx: The Character of Thomas Jefferson by Joseph Ellis

Fallen Founder: The Life of Aaron Burr by Nancy Isenberg

Radicalism and the American Revolution by Gordon Wood

Very interesting review, Brian! It seems that gentlemen had many virtues, acquired because they had the time to think and to become more philosophical and intellectual than the average (working) man.

Hi Suko - Indeed these folks prided themselves upon being more educated then the masses. One of Wood's points was that the America that they helped create scorned that type of elitism.

I don't think this is for me as I know next to nothing about these men and would have to start somewhere else but I think it's great you're revieweing it as there are people who want to dig deeper. It's an interesting choice to focus on the public persona. I'm often more intrigued by what is hidden from the public though.
But I see how it's importnat in this context.

I've never been that interested in American history to be honest--although history was, at one time, a popular book read for me. I can rattle off the kings and Queens of England but can't do the same with the American presidents. Perhaps that has something to do with the fact that a teacher would come around and rap our desks with rulers as we chanted off the chronological list.

I saw a film last night in which a couple of characters debated the fact that Franklin was only remembered because his face is on the 100 bill. I think of him and the Hellfire club

Hi Caroline - The thing is that if Wood is correct, being interested in the personal lives of these men is more of an interest to later generations.

Hi Guy - You made me laugh about the rapping knuckles.

The hellfire club thing with Franklin is interesting and amusing. He really did a lot to capture the public imagination at the time. One aspect of this book that I did not touch upon is that Wood argues that part of Franklin's public persona, that of the backwoods rural philosopher, was actually fashioned by the French public as he spent many years in France.

Interesting review Brian. It seems it was a lot about the constructed public personality back then. Today's politicians have these constructed public personas, but it seems family life is also thrown into the mix to make them seem more relatable to the public.
I can imagine this book would appeal to fans of the American Revolutionary times. I always enjoy learning while reading, or watching documentaries.
I recently watched The Men Who Built America on the history channel. It was fascinating, I wound up watching the miniseries twice. It centered around Carnegie, Rockefeller, Ford among others. I recommend it!

Hi Naida - One of Wood's points was that shortly after the Revolutionary generation left the stage the American public became to adopt a new attitude and became interested in the private lives of public officials.

The Men Who Built America looks really good! I really need to watch it.

"A thought-provoking and fun read"? Sounds like one! I've read a couple of essays by Wood and have his Empire of Liberty at home waiting to be read, but I wasn't even aware of this title by him. Thanks for bringing it to my attention! It's always interesting, I agree, to reflect on how the subjects of Wood's book so radically differed in their thinking from many of those of their political descendants today.

I think that today most of the Founders would be labeled in the public eye as elitist and even arrogant.

Have you read John Adams and 1776 by McCullough? Both are great reads. This book looks like a great follow-up to those two.

This book sounds wonderful--I love stuff like this. Although I wonder at Aaron Burr being included--I've always thought of him as a boor and a lout and not really one of the giants that we classify as a Founding Fathers.

Hi Heidi - I did read both books. I actually found 1776 a bit disappointing. I thought that it was a little too general; and unfocused. On the other hand I found McCullough's John Adams to be a great biography.

Hi Jane - One of Wood's points about Burr was that he was essentially scorned by many because he did not act "disinterested". In many ways he was the template for the modern American politician.

Interesting! Though probably a little in-depth for me.

It's not surprising, though, that public image was very important to the American Founders. I've heard the same thing in documentaries. I imagine with the charged political setting, the only people who could be successful (and be remembered through history) would be the people who concentrate on their image.

Hi Rachel - It is so true that image is so important in politics. All to often it is more important then the reality of a person.