The Brothers Karamazov and Buffoonery 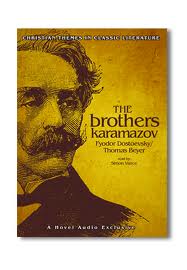 The following is based on the Richard Pevear and Larissa Volokhonsky translation of this novel.


Fyodor Dostoevsky possessed amazing insight into the human mind. Many of the characters in the The Brothers Karamazov are drawn in intricate complexity. They are also lively and entertaining. It seems to me that they come close to real people. The portrayal of the entire Karamazov family is an aesthetic triumph. I could write pages and pages of commentary on the entire clan.

Case in point is Fyodor Pavlovich Karamazov. The patriarch of the Karamazovs, Fyodor is a terrible father, a cheapskate and a sexual abuser of the mentally disabled. Fyodor abandons his sons at an early age, is lecherous and he refuses to part with money even when it is owed to others. He is repeatedly described as a buffoon. He is also often hilarious. What a marvelous literary creation he is.

Though I am not intending a full-blown character analysis on Fyodor, I find Dostoevsky’s take on his foolishness unique. As the author spells it out, Fyodor’s buffoonery is a kind of pathetic rebellion against the world.

Though speaking of another clownish figure, Alyosha, one of the Karamazov brothers observes,

“there are people who feel deeply but are somehow beaten down. Their buffoonery is something like a spiteful irony against those to whom they dare not speak the truth directly because of a long-standing, humiliating timidity before them. Believe me … such buffoonery is sometimes extremely tragic”

At one point Fyodor himself comments,

“That is exactly how it all seems to me, when I walk into a room, that I’m lower than anyone else, and that everyone takes me for a buffoon, so ‘Why not, indeed, play the buffoon, I’m not afraid of your opinions, because you’re all, to a man, lower than me!’”

I believe that there is something to this. We all likely have encountered people who behave so overtly clownish as to be embarrassing. I like to be careful when trying to fit large groups of people and a spectrum of behaviors into a single box, as I do think sometimes in an effort to create universal rules, we overgeneralize and thus turn insight into dogma. However, at least some of the time, the question arises; is this type of conduct truly a form of rebellion and contempt for certain aspects of society and behavior? Is it a safer way to challenge authority as opposed to outright defiance? There is a tradition of clowns and jesters speaking truth to power and getting away with it when no one else can. The concepts of seriousness, piety, honor, straight talking, etc. do seem to be challenged by this over the top foolishness. It makes sense, at least in some cases, to look at such clownish attributes as a kind of guerilla warfare against accepted convention.

For instance, such real buffoonish behavior as disrespecting oneself, saying inappropriate things and being disruptive is in many ways counter to what is commonly considered honorable and polite comportment. This is illustrated hilariously in The Brothers Karamazov when Fyodor visits Zosima, an elderly monk characterized by pious wisdom. Fyodor succeeds in making a fool of himself by arguing with his companions, engaging in melodramatic outbursts and by addressing Zosima in inappropriate and pretentious terms such as “Great Elder” and “Sacred Elder”. I think in an odd way, this can be seen as contempt for so-called acceptable etiquette. It is an attack upon social conventions. In some ways Fyodor is a human satire of the society around him.

This is but one little appetizer in a grand buffet of sociological and psychological commentary presented in this book. One thing that I loved about The Brothers Karamazov is that it is chock-full of such insights and observations.

My additional commentary on this novel can be found at:

The Brothers Karamazov by Fyodor Dostoevsky: Some Underlying Nuts and Bolts

I m planning to read his notes of the underground over the summer its been a long time since I ve read him brian ,I remeber loving this one at the time ,all the best stu

Fyodor is a true disciple of Nikolai Gogol.

I seem to have erased my comment. I'm using my new Apple and am still learning the ropes. One more time:

Good analysis on Fyodor's character. I think also that people like him choose to act the fool when they are young but as they grow older, if they don't change, this characteristic gradually possesses them and they become enslaved to it.

Fyodor spent most of his life exercising no restraint or boundaries. Up to his death, he never repented. Little did he know that one of those whom he showed no mercy or compassion finally caused his demise. He proved himself worthless in his illegitimate son's eyes and since this wretched man had become a disciple of Ivan's teaching, he justified murdering his own father.

Demetrious also lived this way but a conviction that it was wrong grew in him and his heart changed. That's why Demetrious' story ends with hope-even though he's on his way to Siberia.

Interesting post Brian. I do think by wearing the mask of a jester, or by being a clownish person, one can get away with saying certain things, as long as it's disguised with humor. How many comedians throw their political and personal beliefs into their jokes? And they do get a good laugh from the crowd.
It sounds like you've enjoyed reading The Brothers Karamazov very much.

Hi Stu - I have not yet read notes from the Underground. I look forward to your commentary on it.

Insightful take on Demetrious. Indeed, he is changing in a way that Fyodor did not. And yes, Fyodor sowed the seeds, in more way then one, of his own demise.

Hi Naida - Comedy is an amazing human phenomenon. At least sometimes, and to some degree, the Comedians can say things and not elicit as much anger or backlash as serious commentary.

P.S. Sharon - have fun with the new computer. I have used Macs for years and I love them.

I tried this book when I was far too young. I really need to go back to this one.

Hi Ryan - About ten years ago I started a project to reread everything that I read when I was young and did not get. I found that it was very rewarding thing to do.

Brian: I thoughts Notes from Underground was hilarious. I loved it. Your enthusiasm for Dostoevsky shows on every line.

A while ago, I was lucky enough to see a biopic on Dostoevsky--Russian of course, and it was marvellous. I think it's only available as a region 2 DVD but if you have an all-region player, it's excellent (and D. is portrayed by one of my favourite actors).

Hi Guy - I really must get to Notes from the Underground soon.


As for the The Brothers Karamazov, I think that folks often forget how funny it is in parts.

I will poke around for that Dostoevsky biography.

Interesting reading. Thanks for the links to your further commentary, I'm heading over there now.

Hi Petty - I really did get a lot out of this book.

Your posts really puts me in the mood to read this.
I had no idea of the humurous aspects of the charcaters. I didn't find a lot of humour in those books I've read.

There are times when words come out as comedic when they are not meant to be. I think there is such a thing as the Comic Spirit, which also resides in satirists. I don't think there are any satirists among the Karamazovs though do you think? Maybe the satirist is Dostoevsky!

Hi Caroline - I wonder if the humor comes out more in the translation that I read. Though I have no other translations to compare it to, I have heard that Richard Pevear and Larissa Volokhonsky really made a major effort to bring out all the aspects of the original text.

Hi Harvee - Dostoevsky was definitely playing the satirist here. I agree that the Karamazovs do not fit the role of traditional satirist.

On the other hand I think that Alyosha's above quote can be interpreted as seeing all silly people as satirists.

Really? Not a lot of humor? I think of Dostoevsky as practically a comedian. My week on Karamazov was largely about the comedy in the novel. It is the only part of the novel I take seriously.

Fyodor, the father, is the satirist among the Karamazovs. See above, Gogol, Nikolai, although the question of exactly who or what Ivan is talking to in his encounter with the devil complicates the answer.

Hi Tom - I will check out your posts on this book.

I would say that Ivan took his conversations with the Devil or whoever he was pretty seriously at least towards the end. The entire episode really was satire thus making Dostoevsky the great satirist.

Tom,
I've read Poor People, Crime and Punishment, The Player and The House of the Dead and they did not strike me as funny. I did however find Gogols Dead Souls hilarious, so I guess our sense of humour cannot be all that different, I just did not read the funny Dostoevsky yet.

I agree with to that Dostoyevsky was very funny - and, further, that it is a very Gogolian humour. There is something very manic about it - something very close to the edge of madness. Or possibly on the other side of the dividing line.

One of the funniest scenes in the Brothers Karamazov - placed, significantly, in the middle of a passage of rising hysteria - is the scene where Dmitri is desperately trying to raise money at short notice, and Mrs Khokhlakova keeps nattering on quite pointlessly about goldmines.

Dostoyevsky loved buffoons. There are buffoons in, I think, all his major novels. In "crime and Punishment", for instance, there is that drunken sot Marmeladov. The humour is, admittedly, very dark and edgy.

Hi Himadri - The goldmine passage was hilarious. Both Dmitri and Mrs Khokhlakova are absurdly funny in their own right.


I really need to read Gogol.

I hope to reread Crime and Punishment soon. Soonish. Carolien has given me an agenda that could easily fill a week of blogging. Thanks!

Hi Tom - I have never read Crime and Punishment but I hope to someday.

Have fun with the reread!

The only Dostoevsky novel I've ever read is CRIME AND PUNISHMENT, which definitely blew me away! That particular novel is not, from what I remember of the plot, funny at all. I would definitely like to read THE BROTHERS KARAMAZOV, now that I know there's humor to be found in it. It will be interesting to experience Dostoevsky's approach to tragicomedy, although your quotes do give me some idea.

What you point out about buffoons is very true -- I too think that all their joking around is a way of criticizing the current status quo, and getting away with it.

I am also reminded of the opera PAGLIACCI, in which the clown Canio laughs and cries as he sings that famous aria,,, I think it's called "Vesti la giubba". So it seems that Dostoevsky also intended his readers to realize that while we laugh at life, we also, at the same time, know and understand its sorrows, laughing defiantly in spite of them.

Hi Maria- Thank you so much!

Some of the humor comes from the fact that some of these characters are very over the top. The word Tragicom certainly fits them.


Indeed I think that the clowns in several operas and plays represent this idea well.