The Manor: Three Centuries at a Slave Plantation on Long Island by Mac Griswold 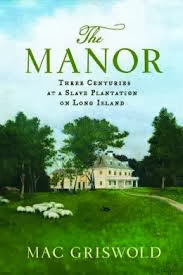 The Manor: Three Centuries at a Slave Plantation on Long Island by Mac Griswold is for me, local history. Shelter Island is a small island that straddles the twin forks of Long Island, New York. As I live on Long Island, Shelter Island is approximately 45 miles (that includes a short ferry ride) from my home. As it is a usually an easy drive and it is an area that I often frequent, it seems to be much closer. I recently visited the Sylvester Manor, which is the subject of this book, on one of the infrequent days that it is open to the public. The below photograph was taken during that visit.

Griswold has written a micro - history that expands out into macro history. In doing so she has written a book that takes the reader in all sorts of fascinating directions.

In 1651 Nathaniel and Grizzell Sylvester established a plantation on Shelter Island. The logistical and economic goal of this “provisioning plantation” was to produce food, timber, and other goods to supply the lucrative sugar plantations of the West Indies. The book covers the first Eighty Years of the plantation’s history in great detail. During this time the Sylvester’s and their descendants developed a thriving agricultural community. Along the way they interacted with fellow Europeans as well as local Native Americans. They also held, at any given time, approximately twenty-five slaves. These were mostly Africans or people of African descent but may have included a few people from other groups.

The remaining two hundred and fifty year history of the property, during which descents of the original Sylvesters retained ownership, are also summarized in some detail. Many notable religious leaders, artists, scientists and other historical figures associated themselves with the Sylvester’s descendants as well as the property over the ensuing centuries.

This is a fantastic history book. Griswold moves well beyond the establishment and operation of the planation.  The book delves deeply into the origins, history, culture, religion etc., of many groups. Nathanial and Grizzell were both British. Nathanial’s family were religious dissenters who fled to Holland where Nathanial was born and raised.  The British and Dutch roots of the couple are closely examined.  Next the customs and history of the Manhasset Indians, the local indigenous people of Shelter Island are explored. Finally, a large portion of the book is dedicated to the Africans who were enslaved by the Sylvesters. In this process the author digs deeply into British, Dutch, Native American, and West African history and culture.

Griswold covers an impressively diverse set of details including religion, ideology, clothing, food etc. as well as how all of these elements came together on Shelter Island. She describes in detail both the historical research that she conducted in Europe, Africa, Barbados and North America, as well as the extensive archeological evidence obtained on the manor property. Griswold manages to cover all these angles in a very satisfying and coherent way. At one point the author herself describes the challenges inherent in telling such a multifaceted story,

“I tell myself, “I must not exaggerate; I must not underestimate.” Is it too big a picture for me to comprehend? From the canals of Northern Europe and the slave castles of the African Gold Coast the line runs to this handsome, smallish house whose serene forehead also hides secrets, and to scientists and poets in nineteenth-century Cambridge, Massachusetts. “

These details are often fascinating. One example of these particulars occurs when Griswold describes the hygiene of the book’s central figures in context of their societal norms,

“A shift was the only article of clothing either Grizzell or Nathaniel would have changed and had laundered regularly. Outer clothing stiffly kept its owner’s shape and smell for decades. Between 1347, when the bubonic plague first struck Europe, and about 1750, physicians opined that the best defense against pestilence was an impermeable skin with pores safely sealed by an encrustation of dirt and sweat. Bathing left the body defenseless.  . . .  Nathaniel and Grizzell wouldn’t have considered themselves unkempt or unclean; their grooming simply didn’t involve much water. People washed their hands, especially before eating, their faces, and sometimes their feet. They dug particles of food out of their teeth with toothpicks or knives; the fastidious cleaned their teeth by rubbing them with a cloth. The slightest move of a well-dressed body must have  produced an acrid, revolting stench. Both men and women wore pomades and perfumes to mitigate the effect. “

One of many of the insights elucidated by this book was how pervasive slavery was in Northern American Colonies and which persisted well into American independence. Many people today are completely unaware just how widespread slavery was in the North up through the early nineteenth century. There is a tendency to think of slavery as  an exclusively Southern institution. The existence slave planation in my geographical area of North America was even a surprise to me! Thus this book will be an eye opener for many.

“…wealthy colonial society in the North— epitomized perfectly by the Sylvesters’ lucrative Long Island plantation— was initially shaped by generations of captive people, until 1827, when slavery was finally abolished in New York State. “

The book does little to sugar coat the hash realities of slavery or the horrendous treatment meted out to the local Native Americans by Europeans. At the same time Griswold spends many pages are exploring how the various cultures and peoples interacted in a complex, and not always antagonistic or exploitative ways.

This extremely well written and researched work will appeal and to a diverse group of readers. In addition Griswold is great writer of history.  Having read a fair number of history books, I can say that this is a really good one.  Anyone who is interested in Long Island history, the history of North American Colonization, the early slave system, North Eastern Native Americans, or the 17th Century in General will find this book fascinating. For those with curiosity about such topics, this work is highly recommended.

More information on Sylvester Manor can be found at: http://sylvestermanor.org/

Thanks for this, Brian. I'm looking forward to reading this one. Reading about slavery in the northeast keeps us from getting too smug about our moral superiority.

Hey Rick - Thanks for stopping by. I really think that you will get a lot out of this one. I look forward to discussing it with you when you have completed it.

Sounds like the sort of book I'd find fascinating. Thanks for such a wonderfully in-depth review.

Hi Tracy - Indeed though something of a micro history, this book should appeal to many people.

Excellent review, Brian. It does sounds fascinating in many ways and on many levels.

Very interesting review. I never thought about the lack of bathing and how people must have smelled. We'd probably pass out if we took a time machine back then. No wonder people's lives were so short.

Also, I never considered how long slavery was legal in the North. A history of slavery in the northern states would be interesting to read about.

Thanks for the review.

This does sound like a fascinating read. That bit about their grooming habits, I can't even imagine.
Sylvester Manor sounds like an interesting spot to visit. How cool that it ties into this book. I myself had never really even knew slavery ran all the way up North like that. I thought it was mostly down South.

I didn't know you lived on long island. Sounds like a great book and perhaps extra rewarding as it is local history

Hi Harvee - It is so interesting how few know about slavery in New York. Griswold also mentions how archeological discoveries on Manhattan in the last few years have thrown a lot of light on the subject.

Though I am a bit of a nerd when it comes to history, this book was so very interesting to me.

Hi Sharon - I just could not resist quoting the bathing part. It was too good of a tidbit.

Hi Naida - The thing is I first began the book and then looked into visiting the manor. I was in the middle of the book when I visited. That was truly an interactive reading experience.

Hi Guy - Yes the Island has always been my home. There is something extra fun about local history.

This sounds very interesting and very well done.
You are right, I wasn't thinking of the North when thinking of slavery. That makes it all the more interesting.
i like it when micro history embraces macro history.

Hi Caroline - It is kind of interesting how the whole Northern Slavery thing resonates with folks. I have toured former slave plantations in the Southern States and thought how things were different there. This property is on my State and in my County!

What a fascinating book. It's cool that it's local history and during the time period you like reading about. It is easy to think of slavery as a southern institution, but you are right in that for a long time, it really was pervasive in Colonial America and after the Revolution.

The fact that this is local history adds so much to the appeal. It seems more connected.

Nice review, Brian - sounds like a fascinating piece of history. Sometimes that's the best way of exploring larger themes, I find. You're right that slavery is usually associated with the South, and something like this really opens our eyes to a different reality.

Interesting to hear about the links to the West Indies plantations too - there are still remnants of that trade with North America in the West Indies today, e.g. the prevalence of salted cod in a lot of Caribbean cooking.

Hi Andrew - One point of the book was the entire linkage in terms of trade, politics, culture , etc., throughout what was known as the "Atlantic World". I know that you lived in the West Indies for a time. I am sure there are so many links. The Salt Cod thing is very interesting!

It's great that your reading experience was enriched by actually seeing the place you were reading about. That is a nice bonus.
Thanks for the pic - I really love the history of old houses and it was nice to see what this one looked like, even if it wasn't the original.

Though not the original that structure was built in the early eighteenth century. We toured the interior. It has been renovated several times but it was still interesting.

Thanks for a great analysis of a book that covers unfamiliar history for many of us in the twenty-first century. The existence of slavery in the northern United States may explain, in part, the ferocity of the abolitionist movement that arose in the the early nineteenth century.

Hi James - Indeed the early abolishists west likely familier with slavery partiality as a result of the Northern experience.

Fascinating post. I didn't know there were slaves in the North too.
Thanks a lot.

Though it was not as widespread, many of the Northern States allowed slavery into the early 1800s. Many people who live here do not even know it.