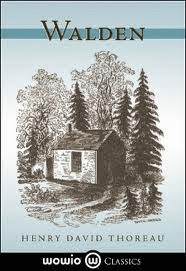 Walden by Henry David Thoreau contains many extraordinary passages. I want to focus upon a particular set of images that the great essayist creates regarding the mutability of everyday human lives and endeavors and the way in which they relate to nature.

When observing some lone abandoned homes and farms in a rural setting Thoreau observes,

“Still grows the vivacious lilac a generation after the door and lintel and the sill are gone, unfolding its sweet-scented flowers each spring, to be plucked by the musing traveller; planted and tended once by children's hands, in front-yard plots—now standing by wallsides in retired pastures, and giving place to new-rising forests;—the last of that stirp, sole survivor of that family. Little did the dusky children think that the puny slip with its two eyes only, which they stuck in the ground in the shadow of the house and daily watered, would root itself so, and outlive them, and house itself in the rear that shaded it, and grown man's garden and orchard, and tell their story faintly to the lone wanderer a half-century after they had grown up and died—blossoming as fair, and smelling as sweet, as in that first spring. I mark its still tender, civil, cheerful  lilac colors. “

I find this passage both moving and thought provoking. I also sometimes look at an old place, be it an office building, factory (Thoreau might cringe at my commercial and industrial connection to his ideas), home, or even a park that has been around for a very long time, and I think about all who have come and gone before. Did these people, who lived, loved, laughed, fought and suffered, ever think how the places that they occupied would change and decay over time? Did they ever imagine that some of these places might be abandoned?  I think about people occupying buildings, homes and other places now. Is anyone else thinking about what these locations will become fifty or a hundred years hence?

Of course Thoreau is talking about the mortality and the finite nature of human life and endeavors. The limited duration of people’s existence and actions in the face of change and in time, is starkly contrasted with nature which at least in a relative sense, seems to exhibit a permanency.

The image of children planting lilacs, which remain long after a home is abandoned and in ruins, and after the children have grown old and died, is particularly powerful for me. This section of the work, titled “Former Inhabitants and Winter Visitors” goes on with these melancholy musings as Thoreau contemplates abandoned wells,

Sometimes the well dent is visible, where once a spring oozed; now dry and tearless grass; or it was covered deep—not to be discovered till some late day—with a flat stone under the sod, when the last of the race departed. What a sorrowful act must that  be—the covering up of wells! coincident with the opening of wells of tears. These cellar dents, like deserted fox burrows, old holes, are all that is left where once were the stir and bustle of human life, and "fate, free will, foreknowledge absolute," in some form and dialect or other were by turns discussed.

It seems to me that throughout Walden Thoreau shows great regard for human reflections and philosophical thoughts of all types, including those concerning “fate, free will, foreknowledge absolute”.  Here however, he seems to be turning a reflective and critical gaze upon even his own views and priorities. Of all the important philosophical topics that people ponder and that Thoreau expresses great interesting in elswhere, I think it may be important that Thoreau chooses “fate, free will, foreknowledge absolute” as an examples of important human thinking and discourse. Perhaps he is reflecting upon the reality, that in the end, whether we are guided by free will or by fate, what we say and do, will pass away. All that will remain will be nature.

Elswhere In Walden, Thoreau rarely dwells upon such sentimental fatalism as he does here. Indeed, this work is filled with the images and musings about change; seasons change, landscapes change, humans change the environment, etc.  However, the author usually celebrates change as a wellspring of new life, new experiences and beauty. Here Thoreau chooses to devote a few pages to the sadder side of existence. In doing so he is exposing what can be viewed as the triviality of certain things that we value very highly. I am glad that he does so. I find these descriptions of the loss inherent in the inevitability of change to be aesthetically masterful.

Your post captures the wistful essence of these passages. They bring to mind the almost too beautiful, sorrowful song by Jimi Hendrix, The Wind Cries Mary. (And my copy of Walden awaits me!)

Yesterday I went through a part of the city I haven't seen in a couple of years. There was a new building in the area, still unfinished. They spring up everywhere these days.
I love old places - houses, churches, and every time I see them disappear it makes me sad.

The world changes much faster these days, don't you think?

Hi Delia - Without a doubt in most places things change so quickly now. Of course there are a few places where change is still very slow. When change comes to that kind of place maybe it is even more poignant.

Moving, thought provoking and wonderfully poetical without being what I think of as being overly flowery.

I agree with Suko when she says this post captures the wistful essence of these passages.

Hi Tracy - Indeed if Thoreau had been overly sentimental here kit would have marred the message.

It is also striking how poetical these lines are.

Every time I reread Walden or portions of it, I find something new. It is true that Thoreau celebrates the changes of nature, especially seasonal. He is not so keen on human change. Who needs the railroad? What is the point of going faster? Why build factories so we can have more things ("Beware of enterprises that require new clothes!"). And yet he borrowed an ax to build his cabin, which act required someone to make the ax.

So true Brian, we usually don't take time to think about who will be in places decades down the line. For instance, I've never thought about who will live in my house or if it will even be here 100 years from now. We so often exist in our own little worlds, our own hustle and bustle.
This is a thought provoking post.

Hi Nancy - Indeed there is so much to walden. I think that I could easily write twenty or so blog posts. Without a doubt he is so very critical of humans and what at the time was modern society.

Hi Naida - is that not a crazy thought? Who might be living in your house in the future? Or another place where important things happened to you. How many more people and perhaps generations will live out their own stories?

"All that will remain will be nature." I like that notion, and I like it as a distillation of Walden, at least this aspect that you're focusing on in this post.

Hi Jane - Yes it really is emblematic of Thoreau that he would see nature as the only thing that lasts.One thing that is different about this passage though, is that the idea is infused with sadness.

A couple of years ago we bought an old brick L-shaped farmhouse in a little village in Ontario. We've done some preliminary searching for historical information and it appears to have been built in the 1880s. When I sit quietly I often sense the history of the place, and I wonder a lot about the lives that were lived within the walls. We very much consider ourselves stewards of the place rather than owners. We're just passing through *its* life. Your thoughts are much appreciated this morning.

Hi Lee - Anne - What a great place to 'temporarily:" posses! I have mostly lived in places of the places that I have not been old at all. Though I do sometimes wonder who lived in them in the recent past.

How true his musing seem to be. All is vanity, as the Bible says.

It really makes you think doesn't it, we make new memories without thinking of those already created or passed through before us.

Hi Lainy - We humans so rarely think about the past.

Hi Harvee - Very insightful connection to The Book of Ecclesiastes. Perhaps Thoreau had it in mind when he wrote this.

walden is such a great book ,I love how even now it has a much meaning as it did then its message of looking after the world around us and taking care of it ,all the best stu

Hi Stu - One interesting thing about Walden is that it really seems more timely now then when it was written.

I love thinking about who has lived somewhere before us, gone before us in buildings and so on. Thanks for a thoughtful post.

Hi Lindsay - It is enjoyable, but for me, also a little sad too.

The area where I live is quickly being turned into another Perth suburb. All the old trees have been felled, the sand dunes levelled, the native vegetation cleared, and the fauna decimated. It's so sad, but most people here don't seem to care very much about the urban sprawl. All they see is the new MacDonalds and the supermarket, which are supposed to represent "progress". I feel sad about the way the environment has changed from a beautiful, sleepy coastal village to an inland sea of brick and tile boxes housing people who spend most of their time indoors. Thoreau knew what he was talking about all those years ago. I wonder if he imagined just how divorced most people would become from the natural world, and how capitalism and the quest for profit would destroy the planet.

Hi Violet- I live and grew up in an area that was rural and isolated when I was a child and now is developed and crowded. It is a terrible shame.

Surprisingly for the tine Thoreau talked a lot about encroaching buildings, railroads and people. I cannot imagine what he would think nowadays.