Charles Dickens's A Christmas Carol and the Ghost of Christmas Present 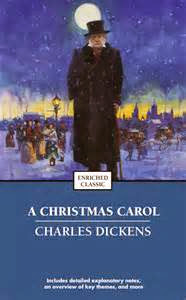 For the first time this holiday season, I have finally read Charles Dickens’s A Christmas Carol. The dilemma for me when composing this post was what to say about this ubiquitous Christmas tale that has not already been said millions of times over. Thus, instead of writing a comprehensive analysis or review, I decided to dig a bit and focus on a relatively small point. Though I doubt that my thinking here is unique, at least I will avoid general commentary on this tale, which from me, seems to be completely unnecessary.  Instead I will write a few words concerning The Ghost of Christmas Present.

When this apparition appears he is described as follows:

“there sat a jolly Giant, glorious to see; who bore a glowing torch, in shape not unlike Plenty’s horn, and held it up”

and then a little later,

“It was clothed in one simple green robe, or mantle, bordered with white fur. This garment hung so loosely on the figure, that its capacious breast was bare, as if disdaining to be warded or concealed by any artifice. Its feet, observable beneath the ample folds of the garment, were also bare; and on its head it wore no other covering than a holly wreath, set here and there with shining icicles. Its dark brown curls were long and free; free as its genial face, its sparkling eye, its open hand, its cheery voice, its unconstrained demeanour, and its joyful air. Girded round its middle was an antique scabbard; but no sword was in it, and the ancient sheath was eaten up with rust. “

Having read a fair amount of Dickens as well as little about him, I have a sense that his worldview usually reflects an easygoing, non - puritanical form of Christianity. I think that “easy going” is particularly important in this instance, as this most interesting spirit seems to exhibit pagan influences.

It seems to me that there are shades of Dionysus with a sprinkling of the Santa Clause myth embodied in this figure. This ghost exudes celebration and good cheer in a naturalistic sense. His bear chest and feet, wreath and icicle adorned headgear, and free curls exude a sense of wildness. There is more then a hint of hint of hedonistic tendencies particularly connected with this character’s ever - present connection to food. The figure actually sits upon a throne of luscious foods and later shows Ebenezer Scrooge visions of even greater gastronomic excess. The ghost’s torch, which resembles “Plenty’s horn” has magical abilities to spread good cheer, and unsurprisingly, liven up meals. It seems to me that in the form of this ghost, Dickens is advocating a form of merriment and celebration that illuminates the Christmas Holidays connection with ancient winter festivals and feasts.

Obviously A Christmas Carol also champions an entire range of values including charity, empathy and kindness. Dickens is examining what he sees as the positive aspects of humanity in great and diverse variety here. Pious virtues are extolled alongside extreme merriment and even a bit of excess.

Without a doubt this remarkable character enlivens and adds spice to the famous story. It also adds an additional dimension to Dickens theme concerning the Christmas spirit. Of course the Ghost of Christmas Present is only a part of the tale that Dickens weaves here. His depiction reminds me that what we sometimes take as simple stories and lessons, are not always so simple.

Email ThisBlogThis!Share to TwitterShare to FacebookShare to Pinterest
Labels: A Christmas Carol, Charles Dickens, Christmas, The Ghost of Christmas Present

This is probably my favourite Christmas story. I love how you've taken one aspect of it Brian and thought about that and written about it. Some stories certainly hide many layers beneath a seemingly simple surface.
Merry Christmas to you!

Great stuff Brian, your in depth analysis is why I love reading your posts.

I agree with Tracy, and I like your focus and ideas about The Christmas Present. Interesting post!

I figure so many people are doing general reviews and commentary, one may as well dig down a bit.

Hi tracy - thanks! You embarrass me :) The ghost of Christmas present was such a fun character to think and write about.

Hi Suko - Thanks so much.

This ghost is such an interesting invention.

I had not thought much about the visions before or examined them in detail as you have done. Great insight and research, Brian.

I've always meant to read this at Xmas but never have. I always intend to watch Xmas films too. I think you're spot on with your analysis Brian.

Hi Harvee - I figured why not dig a little deeper here since the less supernatural characters have been talked about endlessly.

Hi Guy - Thats how I felt about this one until this year!

It is indeed a rather wonderful read and I am pleased that you enjoyed it.

Please forgive my neglect of your blog in recent months. I've been doing other things this year but hope to return to book reviewing next year. In the meantime I wish you a very happy Christmas.

Hi Tom - This work really does exude a holiday mood!

No need to apologize. We all get busy. Sometimes it is so hard to fit this stuff in!


Have a Merry Christmas!

Hello, Brian! I really enjoyed this post. You really made your reading of the character personal which adds to the entire story. I saw a theatrical production of the story a few weeks ago and the character of Christmas Present had been made into a sort of circus ringleader. It seemed incongruous to me then, but now I understand how some of the same joyous exuberance of pleasure and decadence was captured in the character.

Have a wonderful holiday, Brian!

I enjoyed your thoughtful comments on this familiar and favorite Dickens' story. The idea of illumination that you mention struck me as one that is important throughout the story. For example, contrasting the opening poorly heated and poorly lit workplace of Scrooge and Bob Cratchit to the "illuminated" celebration on Christmas Day. Dickens always fascinates while entertaining.

Hi Lee - Anne - I can see how this character could be modified into a ringleader type.


Have a great holiday!

Hi James - Dickens used a lot of symbolism. Without a doubt his entire theory behind Christmas celebration and good cheer fell under the umbrella of "illumination" verses the darkness of greed, anger, resentment, etc.

Very interesting take on this story. When I read the description, I also thought that it was a "carpe diem" description. By his outfit and his attitude, his ghost seems to tell us to make the most of the present, to live at peace with the past and not fear the future or let thoughts about the future or the past spoil your present.

Hi Emma - I think that those aspects apply too. Perhaps that relates a little to the Dionysian aspect of it.

I haven't read this for many years. Thx for this review, it makes me want to pick it up again. SD

Hi Sandra - Thanks for stopping by! Oddly enough I had never gotten to this before. It is so interesting what one can discover during a reread.

Just stopped in to say Happy Xmas Brian and that I hope you like the choices we made for the virtual book exchange.

Merry Christmas Guy! Very happy with the choices from Yourself and Emily!

Definitely a favorite Christmas story and as you say, sometimes seemingly simple stories have a lot more to them than we think.
Interesting thoughts on The Ghost of Christmas Present.

I have been meaning to read this for the longest time, perfect for this time of year. I think I will need to be acquiring a copy. Thanks for sharing your thoughts Brian. I hope you had a lovely Christmas and a great new year!

Hi Lainy - I also had it on my list for a very long time. I finally got around to it!

It is challenging to review something like A Christmas Carol that is so well-known, but I like your comments about Christmas Present. You're right--I can see the pagan influence, Dionysus, and Santa Claus embodied in the creature Dickens describes.

FYI, if you're interested in the roots of this story, I've been reading Pickwick Papers and there's a story embedded in it, "The Story of the Goblins
Who Stole a Sexton," that reads a lot like the prototype of the Scrooge story.

Best wishes for a wonderful 2014, reading and otherwise! I've enjoyed getting to know you this year and your reviews have enriched my reading/writing life.

Hi Jane - I have not read The Pickwick Papers but really want to. I am on a Dickens kick so I think that it is in my future.

I have very much enjoyed your blog as well as your comments here Jane. I suspect there is some great reading in store for us both in 2014.

Last year, I listened to Tim Curry's reading of this story and LOVED it. It's amazing to me how different movies / audiobooks can give this story such a variety of meanings. I think in a way this is one of Dickens' most powerful tales because it means so much - and something a little different to each person. It is probably the most re-made story he ever wrote - which also says a lot.

Hi Rachel - I saw a stage production of this myself this year. There is really a lot that can be done with this work.

It is funny, my wife and I were observing that this may be the most famous non religious story in our culture.