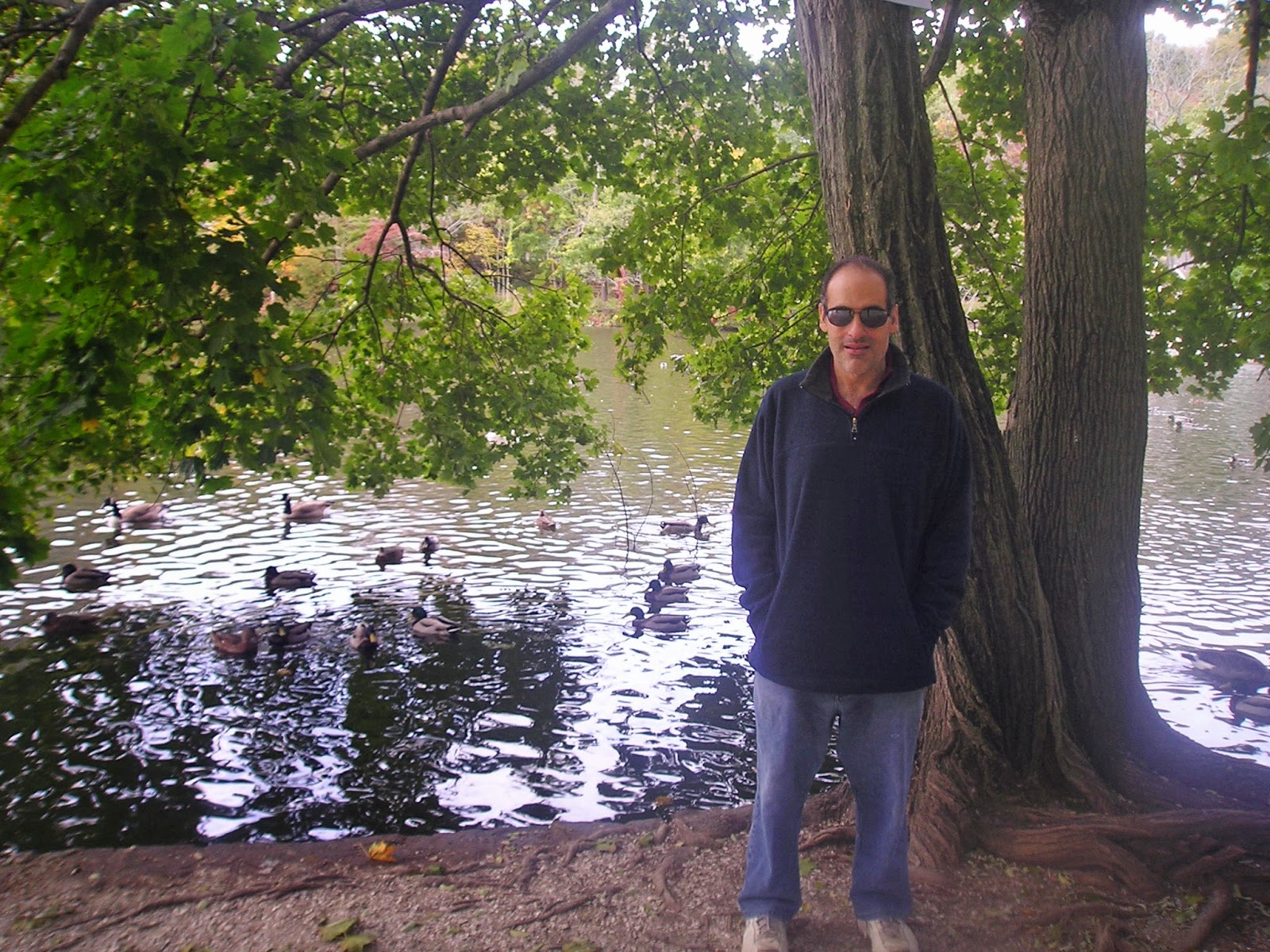 Thanks Delia for having me as your guest.
Posted by Brian Joseph at 5:48 AM

Interesting to learn a bit about the individual behind the blog.

Thanks for being a part of this, Brian. It's wonderful to get to know one of my favorite bloggers.

Away over there now, thanks for sharing the link.

Hi Garry and Tracy - Thank you for taking the time to read the interview.

Thanks Delia for your kind words as well as for hosting me.

I've just read the interview, Brian, and found it to be so very interesting! Your answers were also very entertaining!

Of course I concur with your choice of Shakespeare as a favorite author! I think The Bard would top most people's lists.

I was delighted when you mentioned that Hermann Hesse is one of your favorites! You had told me this previously, but now you've also made it part of this interview, which is great. More people should become familiar with this writer. As you know, he's one of my favorites, as well. There's only one book of his I dislike -- "Steppenwolf". I don't think I've read "Siddhartha", or, if I have, I really don't remember the plot. My favorite Hesse novels are "Narcissus and Goldmund", and "Magister Ludi" (aka "The Glass Bead Game"). Hesse really is, for me, a towering writer, even though there's that one novel I dislike. His writing is informed by the ideas of Carl Jung,as I'm sure you know. So I find him totally fascinating!!

Thanks to you and Delia for bringing this interview to us!! : )

P.S. I'm an ardent lover of the printed book, so I fervently hope that such books never disappear! Since I have SO many of them already, I really need to read them -- at least, the ones I have with me here in the condo. Then I can start on the ones in storage, lol. However, since I'm a compulsive book buyer, I do have some e-books on my cell phone now. They don't take up space, of course, and they're much cheaper. Still, not all e-books are cheaper than physical books. i have seen some priced at $9.99 and higher. Well, for that price, I don't want a simple download, but a REAL book to hold in my hands!

There was a Star Trek (TOS) episode in which viewers got to see Captain Kirk's private collection of real books.....oh, I do hope physical books will NEVER become that rare.....

I will head over!

Thanks for taking to the time to read the interview Suko.

Hi Maria - Hermann Hesse is such a special writer. I love all the books that you mention. I think that you would really like Siddhartha. I can understand why you did not like Steppenwolf. In would guess that you particularly would not like the ending. In that way it was very different from Hesse.

I was sheepish about my comments on Ebooks. If my guess comes to be at least high quality hard covers will be retained in many people’s libraries.

I think that there were several Star Trek episodes where we saw Kirk’s collection of real books.

And who can forget this great scene:

Ooohhhh, I LOVE that scene!1 In this one, Kirk doesn't seem quite so enamored of physical books.....The lawyer, Cogley, expresses my own sentiments (even though I'm not a lawyer) quite well!

As for the novel, "Steppenworl", you are quite right that I especially detest the ending. However, I also disliked Hesse's emphasis on Harry Haller as an intellectual, and Hermine as being his exact opposite -- someone immersed in the everyday world, with all of its sensual pleasures. In other words, the man represents the life of the intellect, while the woman shows little to no interest in that, prefering to just live life with all of its pleasures, perverse and not so perverse. So I guess that I resent the depiction of a female character as rather frivolous and not inclined to serious thought at all. This whole thing is a stereotype, of course. Women, too, can be serious thinker!.

Well, on the other hand, there's Pablo, the saxophonist and owner of The Magic Theater. He's certainly no intellectual.

Perhaps I should force myself to re-reas this novel, in spite of the horrible ending, because I have forgotten much of the plot. However,I do feel VERY strong resistance to doing so. When I first read it, I was actually FURIOUS AT Hesse for writing it! I had the feeling that Hermine was just a convenient tool for Haller's inner development. When both he and Hesse (Harry is Hesse's alter ego, I'm sure) were done with her, they simply got rid of her! (I have always found it interesting, though, that this female character is named Hermine. Could Hesse have meant her to represent his feminine side?)

And then, of course, that ending!! I hate to say this, but I totally DETEST this nove, and the main reason is he endingl!

After all is said and done,I still like Hesse's work. He captivated me especially when I was in college.

Great stuff, Brian. I enjoyed your interview - I've left a comment at Delia's :)

Hi Maria - I think that Hesse was not at his strongest when portraying women. This seems to be true across his work.

Hermine defiantly fit many stereotypes of women that characterize women. She seems to be an archetype for many old ideas, including those that relate to gender.

Such portrayal of women in art throughout the centuries is certainly something that understandably provokes resentment.

I really think that you are on to something, Hermine's name seems important and I think that she does represents a pert of the author.

Hi Jacqui - Thanks for taking the time to read the interview!

I left a comment at Delia's too.
It's nice to get to know more about you.

Heading over there now to read the post, and thanks for linking to it here.

Thanks Caroline! You know that you were one of my first Blogger friends?

Thanks for reading Lindsay.

What a nice wee feature, its always nice to learn more about the people we bond with over logs. I love love love Truffle, what a cutie!

Hi Lainy - This has really been a fun experience.

Truffle thanks you for the complement.

I enjoyed the interview Brian! It's very "you".
I can relate with your take on the Kindle or paper book but I have to say I would fall asleep with Shakespeare on a desert island :P The Bard was a genius but unless I was trying to act out the plays I'd be zzzzzz.
Happy weekend!

I think that acting out the plays is a very valid way to enjoy Shakespeare.

I enjoyed reading your interview. While there are many things I like about reading your blog posts, one quality I respect jumped out when you were discussing the use of Ayn Rand's novels as door-stoppers. The fact that you carefully criticize, that you take a more nuanced approach to criticizing and analyzing even works you don't like is something I respect. It's refreshing, because a lot of criticism I see in blogs amounts to personal attacks or the reviewer trying to make themselves look superior at the expense of the author; the critique becomes an exercise in vanity.

Hi Hila - Thank you so much for the kind words.

While I am not sure if you meant to say this I am doing a little soul searching on how harsh I was on the Ayn Rand books. While I stand behind everything that I wrote, her books are full of ideas. I actually think that she has lots of good ideas. I become a bit frustrated however that the ideas seem to be taken to extremes. I think that I allowed that frustration out a little too much and that it would have been more productive had I tempered my criticism my mentioning more of her good ideas.

How nice! I'll be reading it!

Thanks so much for taking the time to read it Harvee.