The Fidget by Anton Chekhov 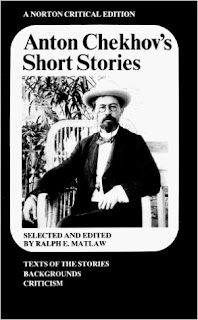 I read the Larissa Volokhonsky and Richard Pevear translation of this story.

As I observed here, one common aspect of Anton Chekhov’s stories is that they champion the voiceless. In the story Anyuta, the tale’s namesake is exploited by her boyfriend, Stepan Klochkov. In response, Anyuta suffers silently. Furthermore, Stepan shows no redeeming qualities.  Having read a fairly large number of Chekhov’s stories, I can say that this type of unhealthy relationship is very common in the great Russian writer’s tales.

The Fidget is another of the tales of the voiceless as well as their exploitive counterparts. Newlywed Olga Ivanovna neglects her husband, Dymov, and cheats on him with her artist friend, Ryabovsky. The entire story concerns her ill treatment of him. Though Dymov comes to realize what is going on, he never confronts his wife.

When she decides to cheat on Dymov, Olga Ivanovna ponders,

“She wanted to think of her husband, but the whole of her past, with the wedding, with Dymov, with her soirées, seemed small to her, worthless, faded, unnecessary, and far, far away… What Dymov, indeed? Why Dymov? What did she care about Dymov? Did he really exist in nature, or was he merely a dream? “For him, a simple and ordinary man, the happiness he has already received is enough,” she thought, covering her face with her hands. “Let them condemn me there, let them curse me, and I’ll just up and ruin myself, ruin myself to spite them all… One must experience everything in life. Oh, God, how scary and how good!””

As cruel as the above is, there is a tinge of regret in Olga Ivanovna’s mind, despite the fact that she rationalizes her actions with, “For him, a simple and ordinary man, the happiness he has already received is enough” she realizes that what she is doing is wrong.
This is unusual for Chekhov. In most of his other stories, like Anyuta, those that exploit the good and the silent do so without any regret. Furthermore, the malicious person usually gets away scot-free and ends up self-satisfied. However, something unusual happens in The Fidget.

Upon Dymov’s death, Olga Ivanovna is wracked with guilt and regret,

“Olga Ivanovna recalled her whole life with him, from beginning to end, in all its details, and suddenly understood that he was indeed an extraordinary, rare man and, compared with those she knew, a great man...The walls, the ceiling, the lamp, and the rug on the floor winked at her mockingly, as if wishing to say: “You missed it! You missed it!””

Olga pays a price for her horrible treatment of Dymov. Her punishment is self-reproach. The story ends on this note. This reader is left to wonder what becomes of her. Will she go on, full of regrets as broken person, or will she use this tragedy and create something better for herself and for the world?

I think that there is at least some hope in the fact that Olga Ivanovna realizes what she has done. It gives her humanity. This is rare, as Chekhov’s oppressors do not usually show much compassion. Checkhov often wrote stories filled with darkness. Often the humanity he illuminates is only present in the downtrodden. In this tale, however, we see some light even in one who is culpable.

Email ThisBlogThis!Share to TwitterShare to FacebookShare to Pinterest
Labels: Anton Chekhov, The Fidget

You're right, I do think Chekhov had an interest in the disadvantaged and downtrodden in life - his stories always have something insightful to offer.

Hi Jacqui - Indeed, folks who were somehow at a disadvantage, were a prime concern of Chekhov.

Through this story I get glimpse of an extra ordinary couple who suffered with kind of mental disorder.

I appreciate your effort to bring up stories from various culture. Thank you so much

This sounds like a depressing story. That passage you quoted especially shows Olga's character trying to almost rationalize her cheating ways. "ruin myself to spite them all..." She's her own worst enemy. I need to read Chekhov.
Happy weekend!

Hi Baili -Seeing such destructive behavior in light of mental disorder is an interesting interpretation. It gets into all kinds of philosophical territory. I think that one can read a lot of fiction like this is one were so inclined.

Hi Naida - Many of Chekhov's stories are depressing. He tends to look at the dark side of people.

Olga is indeed her own worst enemy. Chekhov had a way of getting into such people's heads.

I like it when the characters aren't all good or bad; it makes the story more complex I think. For whatever reason I don't think Olga will get over her self-reproach.

Hi Susan - I also like characters that exhibit shades of grey.

I think that Olga will carry what she did throughout her life. However, I wonder if she will grow as result.

Hello Brian! Having read several stories of Anton Chekhov and many Russian writers, I agree with your opinion. That said, I find reading his stories very enjoyable and not at all depressing, this thanks to his sense of humor.
Brian, thanks for making me want to discover other stories of Anton Chekhov. It was a long time since I had read his works. By the way, do you mind if I review my latest read of Anton Chekhov? (I could publish them in June?... let me know)
P.S. I look forward to discovering your photo project... Happy Spring

I would love to read your commentary on Chekhov.

His sense of humor was often brilliant, but there is so much tragedy in his works.

I will try to photograph some murals and post them :)

Hi Brian. At first I didn't recognize the story but I found it in my collection titled "The Grasshopper." I re-read it just now so I could comment. :)

This is such an interesting story and I appreciate Chekhov's honesty in describing it. He shows a flighty, self-absorbed woman who seems incapable of caring about her husband because her concern is to search for excitement and stimulation.

Her wake-up call seems to be when she is thrown over by her lover and she finally realizes how horrible she has treated her husband. Then when her husband becomes ill and eventually dies she is filled with remorse.

Unfortunately, seeking fulfillment by using and hurting others can't drown out the empty rattling of one's soul. Olga does not seem to find any hope in her regret. But, as you say, it ends without the reader learning how Olga's character develops beyond the immediate story. Perhaps because Chekhov does not know either.

You seem to have a heart for the hurting, Brian. Maybe that's why you are interested in these stories. Have a good week.

Hi Sharon - I do tend to feel for others in pain.

I think I would struggle to not be swept down into the darkness whilst reading these stories. I think there is a reason I tend to avoid the Russian authors--they are very dark indeed.

Hi Jane - I need to read more of The Russian greats to be sure, but I think that Chekhov was darker then the others.

Well....having been cheated on myself, I have to very honestly say that I don't feel an ounce of compassion for this woman. Her self-reproach is indeed a fitting punishment for her. I have no sympathy whatsoever for people who are unfaithful to either their boyfriend/girlfriend, or spouse. The type of rationalizations this character uses is typical of what cheaters do. They turn their betrayal into something justified by the "failings" of the person being cheated on.

Even if, in fact, the person the cheater is cheating on is not a good partner, this is not the way to go about things. If someone is unhappy in a relationship or marriage, the right thing to do is to confront the issue, by calmly discussing the situation with their partner or spouse. If the problems cannot be resolved with therapy, then an amicable separation or divorce is in order. But cheating? This is a DESPICABLE thing to do. The HONORABLE thing to do is to separate from the person one cannot be happy with, and THEN seek out someone more suitable.

Unfortunately, as always, it's PRECISELY the people who are the kindest and nicest who get betrayed. And the betrayer ALWAYS rationalizes his/her actions, without a single thought as to how these actions will affect the person being betrayed.

This is definitely one Checkhov story I don't think I can read. I know, because I attempted to read "Anna Karenina", and had to give up in disgust.

Thanks for your insightful commentary!! Hope you're having a great week!! :) :) :)

I mostly agree with you on the cheating. My only reservation is that in the cultures that existed in these older stories sometimes people were trapped when they are married to reprehensible people and are married in name only. In our modern world I think that these situations still exist in certain parts of the world.

I don't think I've come across any story by him in which those who exploit the others felt bad about it. Interesting.

Hi Caroline - It is the regret that made this story stand out for me.

I haven't read any Chekov yet, but 'The Cherry Orchard' is one I had in mind to read. Have you read this? Russian authors have always interested me. Yes, their writing is often dark but Russia wouldn't be an easy place to live in, I don't think. I love the ideas and and depth that's usually found in works by Russian authors.

Hi Carol - I read The Cherry Orchid a Long Time ago. I remember thinking it was brilliant. I think that all of Chekhov's plays are worth the read.

I agree that the nature of Russia had a lot to do with producing its great writers.

Thanks for trying to help me with that issue. I really appreciate, Brian.
Here it's sunny and warm, but apparently it's about to change.. Hahaha... by the time it gets rainy and cloudy I won't be here. See you next week :)

This is another of Chekhov's stories that provide insight not only into the characters but also into the ethos of Russia nearing the end of the Empire. It is interesting to compare his stories with those that followed in the Soviet era like Gorky.

I need to read Gorky. I think the only writer from the early Soviet era that I have read if Andrey Platonov. He is wildly different.

Maybe it's because she's a woman that she experienced remorse? That would be about the only difference from Anyuta.

Hi Evelina - It is certainly possible that Chekhov viewed women differently in this respect. However, in several other stories and plays Chekov's victimizers were women who showed no regret. In the Ravine is a story that comes to mind where one of the characters was a terribly malicious woman.

Question: Why the title The Fidget?

The reason for the title is not that clear. I tried to Google it. Some translators have translated it differently. The Grasshopper is sometimes used.